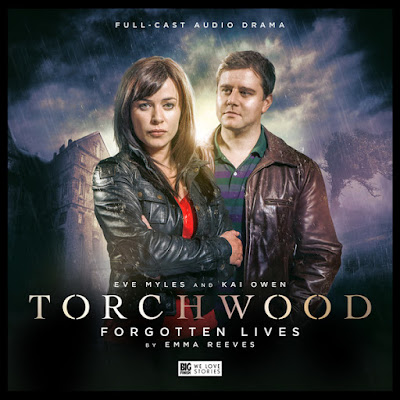 Out now is the third Torchwood audio adventure and this month Eve Myles and Kai Owen reprise their roles in Forgotten Lives which takes place 4 years after Miracle Day.  You can order this audio adventure from the Big Finish website.
http://www.bigfinish.com/releases/v/forgotten-lives-1296

It has been four years since the Miracle, and Gwen and Rhys's lives have gone back to normal, very normal. They're raising their daughter (they've got pictures they'd be only too happy to show you), they're living in a nice house, and they're almost on top of the laundry.

Captain Jack Harkness has been missing from the world and their lives for a long time. But late one night the phone rings, and they're summoned to an isolated part of North Wales. The Bryn Offa Nursing Home contains a dark secret, an alien threat, and someone who really shouldn't be there.

Gwen and Rhys are about to discover that Torchwood stays with you for the rest of your life.

Produced by James Goss
Script edited by Steve Tribe
Posted by DR5WHO at 9:41 AM