Doctor Who - Terror of the Sontarans Review 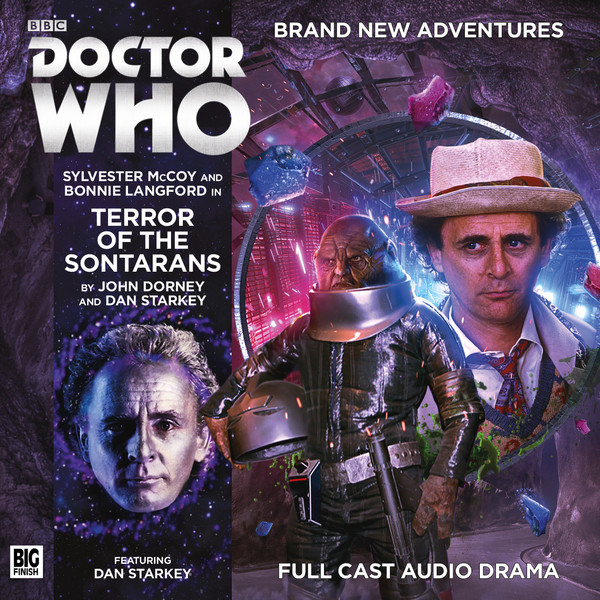 The Doctor and Mel are responding to a distress signal on a hostile alien world to find that the base that the signal originated from is deserted.   But they stumble upon a Sontaran that doesn’t seem all that mighty and appears to be afraid of something.  Soon another group of Sontarans have arrived searching for the missing research team.  The Doctor soon discovers that there is an evil on this planet that is more of a threat than a bunch of warmongering Sontarans something so evil that it drives humans and Sontarans mad that it eventually drives them to death.  So it’s up to The Doctor and Mel to figure out a way to save everyone human and Sontaran without getting killed in the process.

One thing that Big Finish is good at it’s not making the Sontarans silly and the butt of jokes.  The Sontarans in Big finish are the ones like in the Classic Series and they are even more menacing at times than the classic series version also.  They are that and more in Terror of the Sontarans and that is one of the good things of this audio adventure.  Another good thing is the performances of Sylvester McCoy and Bonnie Langford.   They have yet again put in a stellar performance and every time I hear them on a Big Finish it makes me wonder what if this duo where written like this instead of what we got on TV.  Here you have a Mel who doesn’t scream at the top of her lungs when the Sontarans come around the corner or when she gets frighten by a creature.  Big Finish has reimagined Mel for the better and actually treats her as a companion who is smart and not the annoying girl from the TV show.

Terror of the Sontarans was co-written by Dan Starkey who as most of us Doctor Who fans know plays Strax.  He is the Sontaran butler for Madame Vastra and along with Jenny makes up the Paternoster Gang.  He was also one of the Elves in the last Christmas Special Last Christmas.  I always find it interesting when members of the Doctor Who community write a story whether for Big Finish or a comic strip.   Now whether or not he just came up with the idea or actually wrote part of it who knows as the premise was pretty good.

Unfortunately I did not care for Terror of the Sontarans all that much.  It started off ok but to me it just seemed to get all confusing towards the end.  I found it hard to determine what is going on and with all the Sontarans sounding the same it made for a hard to follow audio and figuring out what character was what.   I also wasn’t that keen on the story either as it’s getting a bit old hearing about a great power that can take over a person and uses them for their own means.  It has been done before and a lot better.  At least we get a story with the 7th Doctor going up against Sontarans and lots of action.
Grade C