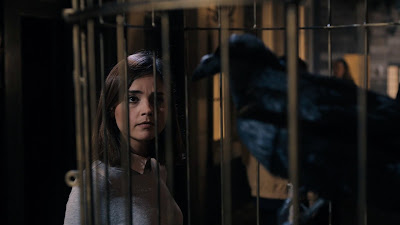 This is a very interesting episode and it is obvious that the number of open endings in it means that the story still has to be completed. After what some consider to be one of the worst episodes in years, "Sleep No More", we have “Face the Raven” which is a very talky almost murder mystery type of plotline. Rigsy (seen in last season's “Flatline”) is in trouble and calls the Doctor and Clara. He has a tattoo of a number on his neck that is counting down. The team investigates and locates a hidden street in London that acts as a sanctuary for stranded aliens on Earth. It appears that Rigsy killed one of those aliens and the countdown is when he will die. He has totally forgotten about the previous day. What the real story is concerns Ashildr (Maisie Williams) and yet another elaborate plan to capture the Doctor. Who set the trap and why is to be determined next episode but that is not important right now. 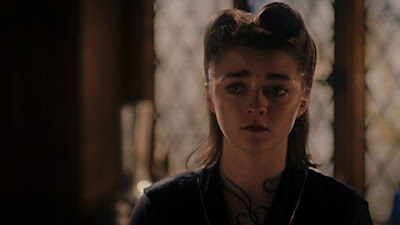 The elaborate death sentence that Rigsy is given, we find out, can be conveniently transferred to another willing person. Since Ashildr promised the Doctor that Clara would be unharmed, Clara thought it would be smart to take the countdown death herself and Ashildr would be forced to take it off or the Doctor would figure out how to fix the problem. This would work any day of the week but not this time because Jenna Coleman is leaving the show. Ashildr seems distraught by this transfer because while she could have removed the tattoo from Rigsy, she can't remove it from Clara.

The Doctor can't do anything about it and Clara accepts her death. A raven swoops down and takes Clara's 'life force' from her. The Doctor is teleported away by an unknown person or persons. That is it. The episode is all about the capture of the Doctor and the death of Clara. The death was telegraphed with all the rumors but was fairly powerful. We have not seen a companion death on screen in quite some time and so it was fairly shocking. Still, this is Doctor Who and I don't think too many people will be surprised to see Clara return to life. It seems unlikely and if they do bring her back it will be a cheat or let down of sorts. The touching good-bye is more powerful as it is and doing anything more might ruin this nice moment. I feel many people are going to be waiting for Clara to pop up in the next episode but I feel that Moffat has done this too many times and maybe he has finally decided to let this one stand. 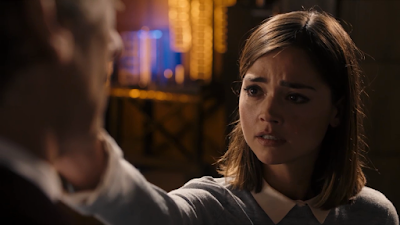 The episode is full of the usual over complicated plots to get to where it needs to go. It is almost theatrical play like in its setting, taking place in just a couple of areas, often with crowds of people (aliens) on the street. It must have been a very inexpensive episode as well.  I don't understand exactly what this sanctuary is as it has some of the most ruthless aliens in the galaxy and they are just hanging out pretending to be humans.  Why look like humans in a hidden alleyway?  Another forced concept that is hard to accept.

I can't really judge this episode without seeing the other shoe drop but this was one of the better ones and a good farewell for Clara, at least for right now.
Posted by SHADOKP at 5:46 PM