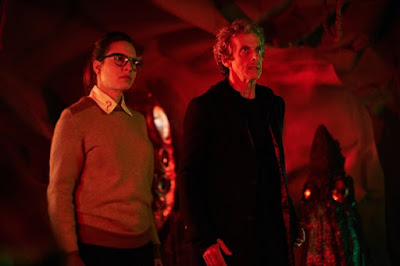 After witnessing a fairly good first part of this latest story I braced myself for disappointment. We have a couple of off screen cliffhanger resolutions and then back onto the plot. The Zygons are about ready to declare war on Earth. Most of the Zygons living there are happy but some are not and now a revolution has happened. It does not look good for anyone.

The story itself is really a couple of rehashes from the last couple of seasons. We are ultimately left with yet another button dilemma. How many does that make now? This is really a continuation of "The Day of the Doctor" but also a retelling with both the button that the Doctor pushes to destroy Gallifrey and the stand off between the Zygons and humans. This similarity may not make this story that original but it does a pretty good job dealing with the dilemma. This time we have multiple buttons and multiple outcomes that ultimately are all fake. This is Capaldi's Doctor doing his “Kill the Moon” schtick again with giving the life forms control over their own destination, sort of. 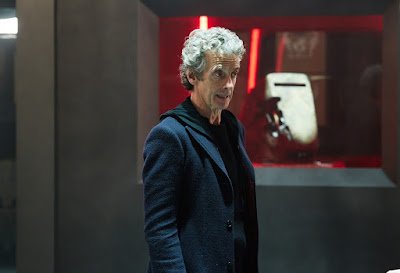 Looking closely at this outcome, it is certainly an uplifting one and one that is without a lot of action. There is no explosion or running around yelling at how good the Doctor is and so on. We have a subdued conclusion that includes Peter Capaldi's best moments as the Doctor so far. His speech was excellent and it is good to see the Doctor talk the situation to a happy conclusion. This may leave some people with an empty gap as they were hoping for that loud frantic ending. It is good that Doctor Who is not always the same. The speech though is not without its flaws and this two parter is very preachy for sure. The idea that a group of aliens begin to attack and then are talked out of their invasion plans is fine. The theme for this is that someone has to take the first step and forgive the other and make peace. It is hard for reality to deal with this when from one point of view you have a terrorist cell infiltrating London and killing people left and right. The idea is great and maybe is the right thing to think but in reality it is purely science fiction. 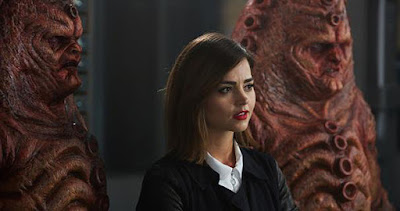 The story also is telling us what to think again. This show always does this and their latest dialog is that Clara is great. We do see some cool Clara things like her ability to try to control her Zygon double but we are also reminded again and again how Clara saved the day in numerous episodes of the past. This will obviously feed the Clara haters reasons to hate her even more. The show does seem to be trying to get us to like her but at this point it is too late. I was a great Clara supporter but the last two seasons have derailed the character quite a bit.


I enjoyed this two parter quite a bit but see its flaws. It is good to see Capaldi shine and Jenna Coleman play a different part and do it well. Ingrid Oliver as Osgood delivers a pretty good part, not very exciting but down to Earth and steady for sure.
Posted by SHADOKP at 6:09 PM