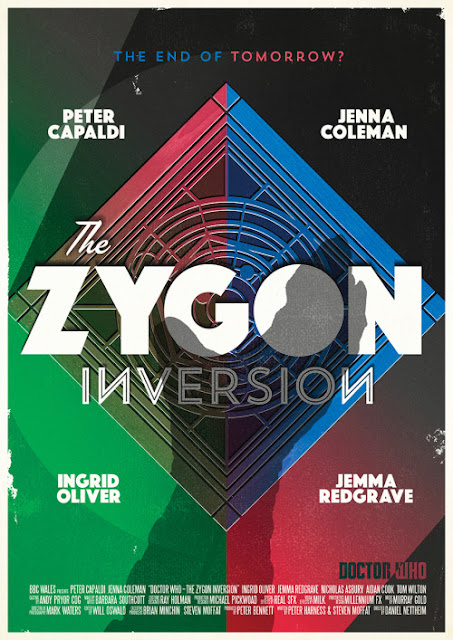 Doctor Who:
The Zygon Inversion
By Peter Harness and Steven
Moffat

The Zygon Inversion continues with the Zygon rebellion as we find out how The Doctor escapes from his plane being blown up by an air to ground missile and what evil Clara really is up to.  I have to say I wasn’t expecting the solution to plane destruction. Well not the jumping out of the plane with parachutes but the fact that Clara was able to manipulate Bonnie and make her miss with the first missile but was not successful stopping the second which gave The Doctor and Osgood the chance to escape.  Now this was an interesting turn of events and made the story a lot more interesting as we had the two Clara’s going back and forth with a mental struggle.  I enjoyed the banter between Bonnie and Clara and I am really enjoying watching Jenna Coleman playing a villain also as it really added to the tension that this story was conveying. 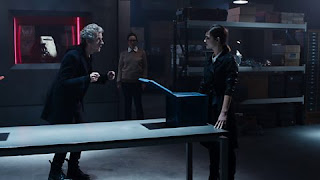 I think the main reason that I enjoyed this two part Zygon story is that it really felt like a classic Doctor Who era story.  Mainly from the Pertwee era as it had that feel to it especially seeing The Doctor trying to prevent a war between the two species reminded me of the story The Silurians and more so in The Sea Devils as the Third Doctor tried and failed to harbor a peace between the humans and their reptile cousins.  The main theme of this story was war and it’s after effects and the tension during the scene with the Osgood box was pretty tense.  I have to say that is one of the best moments of the new series as Peter Capaldi nailed it with that dramatic speech.  At that moment I did not see Peter Capaldi playing The Doctor I actually saw The Doctor and that scene really cemented his Doctor for me as we saw a seriousness draped in sadness as we can really get a feel of The Doctors emotions from what he had done in his past.  That speech will forever be a high point of his era as that moment was powerful and amazing to watch. 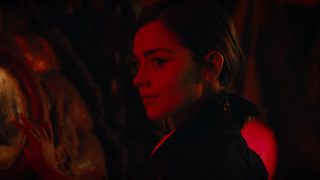 I liked the mystery surrounding Osgood.  Steven Moffat has kept the mystery going and gave the fans something to speculate about.   The clues are there to figure out which one she is and it is pretty obvious but knowning Steven Moffat he will change his mind and we will be wrong no matter what we guess.  My guess is that she is the Zygon as she did not know what TARDIS stood for and she also said she never met Clara before.  So that is my guess on which one she is.  I also found it clever that they made the evil Clara Bonnie the next Osgood duplicate as she was smart enough to figure out what was in the Osgood Box.  Too bad Kate and UNIT couldn’t figure it out the other 12 times the cease fire failed and that isn’t a good thing since its only been a couple of years since The Day of the Doctor. 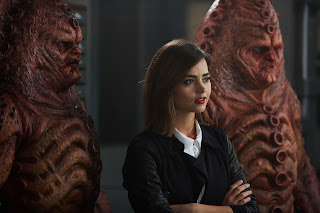 I really enjoyed this two part story and for once you had to think while watching it.  For once the sonic whatever didn’t save the day and there wasn’t all that much action in it at all.  I like having a story like that as it makes you think and makes you pay attention to the message that the writer is trying to convey.  There were some great acting performances in The Zygon Inversion and we saw a side of Jenna Coleman that we haven’t seen before as she played the evil Clara Bonnie and she was fantastic at it as she sure did show some range in both of her characters.  Plus Kate Stewart said her father’s catch phrase “Five Rounds Rapid” and that was enough to make a Classic Who Fan punch the air in delight.  The Zygon Inversion is a really solid story and so far the best of Series 9.
Grade A