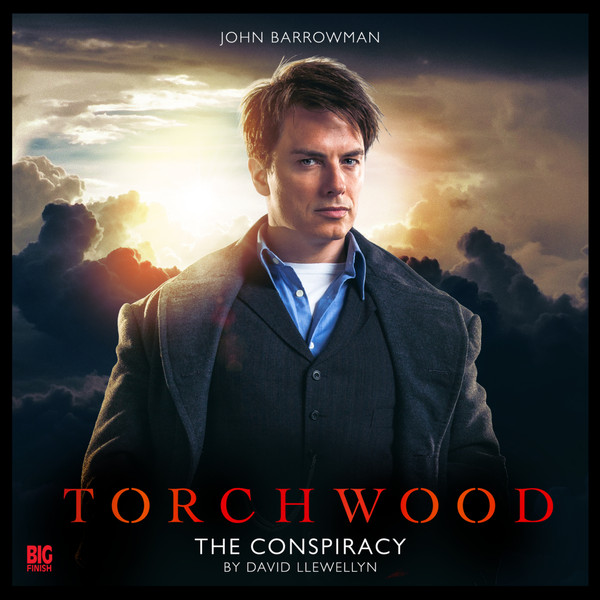 When I heard back in early 2015 that Big Finish was going to be doing Torchwood audio adventures I was a bit excited and couldn’t wait for them to come out.  I was also pretty happy that they got most of the cast to do the audios also with a few surprises thrown in.  It made perfect sense for Big Finish to star with Captain Jack as he was the central figure of the television show.  But then I found out it would only be a one disc 60 minute story and well I had some reservations especially when I found out the story would be narrated also.  I don’t really enjoy a story that is narrated but in The Conspiracy it worked pretty well as it helped move the story along and it wasn’t overbearing as the story was mostly performed and the narration was minimal.  That is a good thing and I forgot the story was being narrated halfway through so it doesn’t really affect it that much.

I really enjoyed the story about Captain Jack investigating the conspiracy theorist George Wilson.  It ended up being a game of cat and mouse and it was good to see Captain Jack being jerked around and confused by the whole situation of George Wilson who ended up being a fake but actually getting things right about some of the conspiracies that Jack knew was real. I really liked the mystery surrounding this story and who The Committee was and how they are connected to Jack which made the ending of this story something a tad bit unexpected and something you wished they tried in the televised Torchwood.  It ended up that it was all a trap for Jack and it ends up that George Wilson’s daughter Kate wasn’t even human after all but part of The Committee and every once in a while feed him something true in a way to draw Jack’s interest. Now this was a pretty good ending as it made Jack go on the run again and leave the everyday running of Torchwood to his trusted friends.

What is good about this series is that the individual releases are linked in a way and my guess it will be with The Committee going after individual members of Torchwood.  If they are written as cleverly as The Conspiracy then the Torchwood audio adventures will be really good going forward.  I really enjoyed The Conspiracy and to actually have Torchwood back in this format will make the diehard fans really happy and hopefully they get some new interest from the casual fan also.  The Conspiracy is a good start to the Big Finish Torchwood audio adventures.
Grade A