Doctor Who - The Yes Men Review (Some Spoilers) 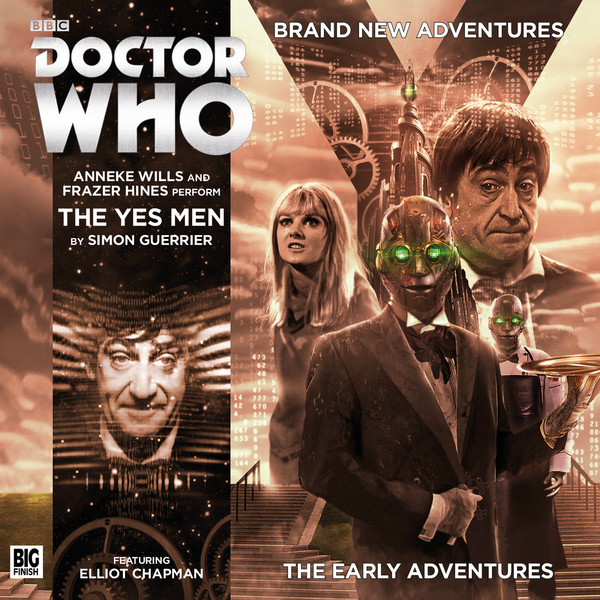 The Doctor, Jamie, Polly and Ben have arrived in New Houston which is an Earth colony in the 4th sector. The Doctor has been there before in a previous incarnation as he tells his fellow travelers that he save this colony from an alien invasion.  The Doctor has a friend at this colony named Meg Carvossa who he finds out has passed away.  Upon learning this The Doctor wants to ay his last respects but finds out that he is not able to.  This gets The Doctor thinking and he begins to investigate what is going on.  Polly also notices that there is hardly any people walking around but there is quite a large number of robots instead.  Things do not appear to be what they seem and The Doctor is worried that New Houston is in a lot of trouble.

With that said I wasn’t taken in with the story.  At first it sort of got my interest but it seemed drawn out.  I was interested in the death of Meg Carvossa when it was revealed she might have been murdered but the story took a turn as we found out she had faked her death.  Ok. Well this plot device has been used to death where you think someone is dead and then presto they are not.  Doing that is getting pretty old and tiring and I find myself not really enjoying when that happens.  Even The Doctor didn’t sound surprised at all during the reveal.

I’m not big on robot stories but I do like them as Robots of Death is one of my favorites.   But this one does take a different approach as the robots seem to be living the life of humans even having children walking around with them, they get new legs and that is how they grow, and it was something different and you can probably figure out what they want next.

Elliot Chapman take over the role of Ben Jackson.  Michael Craze died in 1998 and he originally played Ben.  So Big Finish decided to recast Ben and they made a pretty good choice.  Since there is not much stories surviving that has Michael Craze as Ben in it it is hard to really make a comparison on the two Bens.  To me Elliot Chapman sounds just like the character and fits right in with Anneke Wills and Frazer Hines which makes for a seamless transition.  I’m ok with the recasting of companions who are no longer with us to a degree.  I would balk at a recast of the Brigadier but would be open to it if Big Finish does it right like the way they have done with Jon Pertwee and even with Doctor’s One and Two to a degree as the former companions do their best to recapture The Doctor’s essence.