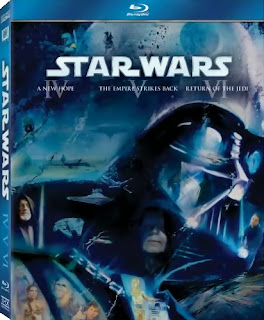 Perhaps one of the biggest events for Star Wars fans in years is the release of the Blu-Ray set.  From the initial announcement to the reveal of extras, the hoopla surrounding this release appears to be big news and I am sure many fans have already pre-ordered the set, no matter what was going to be included in it.
Apart from the obvious HD quality of the movies, the primary focus of the release is the extras.  Boasted early on, the release is to have deleted scenes never seen before.

First here is a link to the information.  Inforamtion also listed below –
http://www.blu-ray.com/news/?id=6326
Anyhow, I am sure there is plenty to satisfy most fans but right away there will be some discussion and disappointment.  First off, there are no Original versions of episodes 4-6.  I know that many want to see this but Lucas has made it clear that he prefer not to show these, at least not until the next release.
My hesitation on purchasing this set stems from the idea that another better set will be out in a year and yet another the year after.  This is bound to happen and will keep happening until people stop buying them.  Don’t forget that we will have a 3-D release in a year or two and don’t be surprised to see more ultimate and complete editions in the near future.
There will be breaking points for some, mine was a while ago.  Some people will give up on buying every release because the new one has one or two extra scenes on it.  I had hoped this new release was more complete than not but by the brief description now available, it doesn’t appear to have everything.  Well, how could it have everything, really.
So anyhow, Star Wars on HD, hopefully the prints are superb and it should be a good set.  I will hold for now and perhaps if there is a really good sale I will go for it.  I may even wait until the next release later down the road.
The breakdown of the 9-disc Complete Saga box set is as follows: