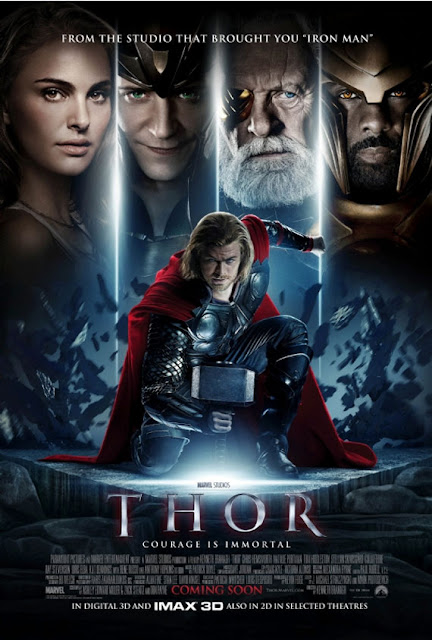 On one of those rare Mondays where there was no school due to a teachers workshop.  My son and I headed down to one of the areas many cinemas and took in the latest from Marvel Comics.  Of course I'm talking about Thor.  I was not a big Thor fan growing up as I did read some of his comics in the
80's.  In fact my main exposure to Thor was from his appearances in The Avengers comic book.  So going into the movie I was a novice to Thor but I did have enough knowledge to pick up on the in jokes.

I enjoyed Thor more than I thought as it was cleverly done.  You didn't have to be a reader of the comic book to be able to enjoy this movie.  Thor was pretty simple to follow as they made an effort to explain who the characters were and where they are in Thor lore.   I did enjoy the story of Thor being banished from Asgard and losing his powers to make him humble.  Not sure if this ever happened in the comics but I enjoyed watching Thor interact with normal humans and seeing how he matured into the hero we know him to be.

Of course there is action in this movie but not as much as you would expect.  There is the obligatory showdown between Thor and Loki that ended in a way that sort of surprised me.  The destruction of the Rainbow Bridge.  I'm sure this will be resolved in The Avengers movie but it will be interesting to see how he gets back to Earth.

In all a very enjoyable movie with a pretty good story that you can use to tell kids what happens when you don't listen to parents.  Just show them what happens to Thor when he doesn't listen to Odin.  That's if the kids remember that part or the part where Thor has a beat down with the Destroyer.

Keep your eyes open during this movie for a cameo from one of the Avengers and stay through the credits for a scene that sets up the Avengers movie.
Grade A