Doctor Who: The Day of the Moon Review (Major Spoilers Proceed With Caution) 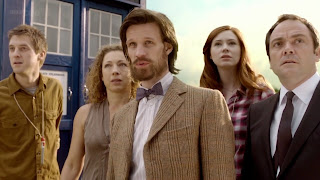 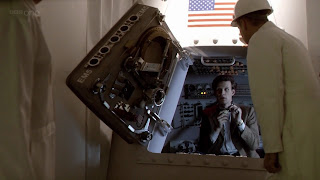 I liked the feel of this episode.  The Day of the Moon was scary and very suspenseful.  I was at the edge of my seat watching this one as I was anxious to see what would happen next.  It was also pretty scary.  Mainly creepy scary.  Most noticeably when Amy was wandering around the orphanage.  That was a pretty creepy scene.  Speaking of creepy I have to say that the Silence is one of the creepiest and scariest creatures to appear in Doctor Who in a long time.  I can't remember a new villain for the Doctor to face that is original and unique.  I'm sure we haven't seen the last of them. 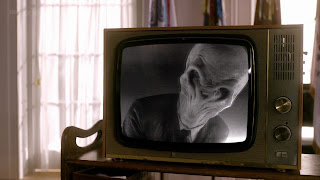 The Day of the Moon had a pretty good resolution to the problem.  The Doctor used his mind and didn't have to resort to a reset button, time travel or the sonic screw driver to defeat the Silence.  I like stories where the Doctor is clever and comes up with great way to win.  It was pretty clever to see the Doctor using a recording of the Silence during the moon landing.  Using there own hypnotism powers against them.

There was a pretty good scene that could have been predictable but Steven Moffat swerved the audience again.   When Rory was listening to Amy over the chip you were to believe that she was talking about the Doctor and that their would be a rift of jealousy going on.  It had me thinking that Amy was going to be another Rose who falls in love with the Doctor.  Luckily Steven Moffat didn't go that route and it was Rory that she was talking about.  Thank goodness for that.  I like the way that Steven Moffat has kept the Doctor and Amy relationship to just friends.  It also helps that Matt Smith and Karen Gillian have great chemistry together.  Those two are most notably one of the best pairings in Doctor Who history 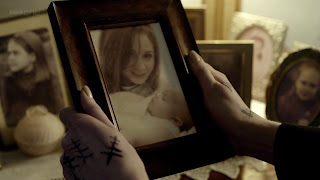 I usually like it when Doctor Who throws in big surprises and great big wow moments.  Usually those are in stories that are kind of weekly written and those scenes are thrown in to help the episode.  Well The Day of the Moon had some big holy cow moments in it.   The first has to do with Amy.  While she was in the orphanage rummaging around for the girl in the astronaut suit she comes across a picture of herself and a baby.  Big questions here and the message boards 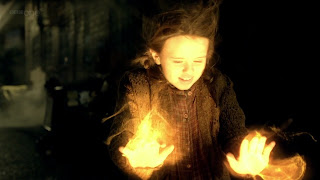 are definitely going to be filled with speculations.  But nothing compares to what happens in the closing moments of this episode.  All the Doctor Who fans are buzzing over the Internet about this one.  This one moment will undoubtedly overshadow what a great story The Impossible Astronaut/The Day of the Moon really is.  We find out that the little girl in the Astronaut suit is a Timelord.  We actually see her start to regenerate.  Now we have big questions going forward and most likely will have to wait until the
Fall part of season six to find out. 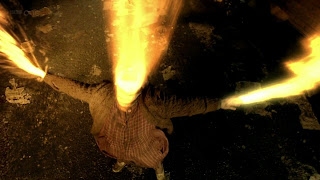 These two stories opened up a big can of worms for this season.  But will Steven Moffat reveal all the scenarios he develop this season or will we have to wait till next season.  If anything Steven Moffat has got people talking about Doctor Who and that is a good thing. 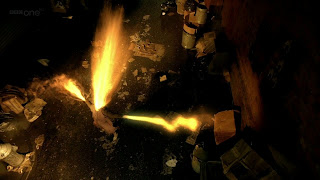 After watching this story multiple times I have to say that the season opener was very different and set Doctor Who on a different direction than what we are used to.  There are so many things to keep the die hard fans guessing but could all these developments keep new fans or first time viewers away.  Who knows but I now that I can't wait for what is next.
Grade A
Posted by DR5WHO at 5:50 PM

Email ThisBlogThis!Share to TwitterShare to FacebookShare to Pinterest
Labels: doctor who, Karen Gillian, Matt Smith, review, Steven Moffat, The Day of the Moon