I Just Missed Your Heart 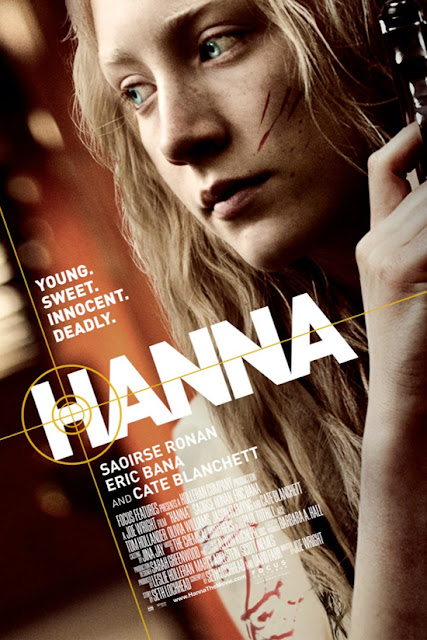 When seeing the trailer for this movie I was a bit hesitant if I wanted to go and see this movie in the theatre or wait and watch it on DVD.  Well along came a rainy Saturday and off I went to see Hanna.
Well I'm glad I did because I saw one hell of good movie.  The thing that stuck out to me that I really liked was how director Joe Wright took chances and made this movie visually entertaining.  Not to give anything away but the chances that Joe Wright took really made the movie for me.   Needles to say I was pleasantly surprised and was not expecting this.  I also liked the music for this movie.  I'm not a huge fan of techno music but how the music was incorporated into the action scenes made them even more exciting.

This movie had a pretty good story to it that makes you think and has a lack of special effects.  So to steal a saying from the Pooka if your a Michael Bay fan I guess your out of luck here.  This thriller of a movie was very suspenseful.  I liked how the chase scenes were orchestrated and was getting anxious to see how Hanna would get out of certain situations.

Saoirse Ronan was awesome in this movie and her performance was another highlight of this movie. You'd never know by looking at her that she could be an assasin.  Thats whats cool about her.  Saoirse Ronan will be a big time movie star in the years to come.   The highlight was during the final confrontation between her and Cate Blanchett charecter the crazy Marissa.  Marissa definitely has her share of issues.   So if you want to see a cleverly written movie with some action and good acting performances then go out and see Hanna.  If you prefer shallow movies with stiff acting and no story with lots of action then go see Fast Five or a Michael Bay movie.
4 Stars