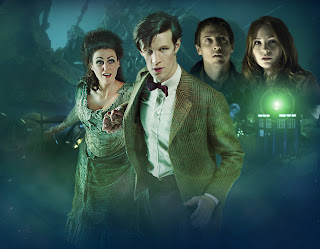 What appeared to be another goofy episode was in reality a highly enjoyable and fascinating journey into the Doctor’s world as he meets someone very close to him for the first time.
***Spoilers*** 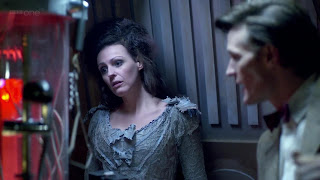 The TARDIS lands into a Time Lord trap.  It is there that the TARDIS shuts down at the same time that a woman suddenly starts acting strange.  The Doctor starts to suspect the trap but is even more shocked when he finds out that the TARDIS intelligence or soul even is transferred into the woman’s body.  Meanwhile a life force from the planet has taken over the TARDIS and is terrorizing Rory and Amy. 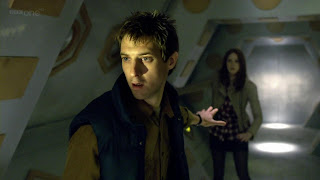 There are so many things in this story that work well.  The actual meeting between the Doctor and the TARDIS is the highlight and one wishes they had more time to talk.  As quickly as their relationship develops, it must return back to the original form.  Still, it is emotional and touching as the two learn from each other.  The dialog written for the TARDIS is well thought out and the actress Suranne Jones does a pretty good job selling the part.  Matt Smith also handles it well. 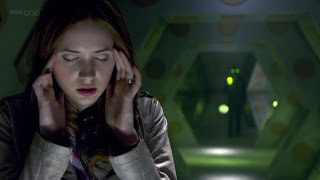 Not to be outdone but some of the scariest scenes this season are seen onboard the safe TARDIS as Amy and Rory are stalked by the alien presence and a possessed Ood.  The conclusion linking both plotlines works beautifully and is a very satisfying episode.  Writer Neil Gaiman, like Richard Curtis last season, has taken the material of Doctor Who and delivered a simple story without many connections to the ongoing events of the season.   He has also written an important story that probably has been tackled by hundreds of fans in the past during their fictional writing – and done a great job.  Hopefully this direction of good story telling, a touch of emotion and some good character work will continue.
Posted by SHADOKP at 4:10 PM