Where was Worf when this was happening? 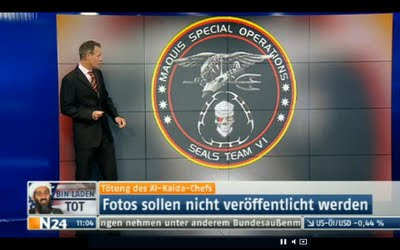 In case you missed it, a German TV station gave credit to the Star Trek Maquis for the death of Osama bin Laden. In reference to the U.S. Navy's "Seal Team Six," which carried out the operation in Pakistan, German news channel N24 displayed what it thought was the group's official seal (above).

1. It's a fan-made emblem for the anti-Cardassian Star Trek fighters known as The Maquis.

2. The skull is a Klingon. German host: "They don't have that skull in their emblem for nothing." Right - it's to tip you off that this is NOT real!

3. There's a spaceship, among other Trek references, depicted in the emblem.

If The Maquis was involved, well, so much for the Prime Directive.
Posted by Harvey The Pooka at 12:19 PM