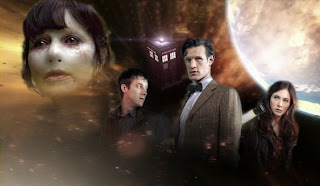 The latest episode, part one of two, turns back the clock a bit with an old school plot that has very little surprises other than it is excellent. 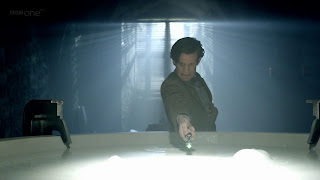 The Tardis lands on a planet where workers control cloned bodies. The danger of their work, with corrosive acid, kills the clones at an alarming rate and so the real humans stay safe in their control harnesses. The process of cloning uses an intelligent goo. The clones or gangers, have suddenly began to think more independently and have staged a rebellion against the humans. The Doctor, Rory and Amy are in the middle trying to find a peaceful outcome, but it may be too late.

This basic idea has been done a million times before. A suppressed class fights for rights. Whether they are slaves, clones, etc, the idea had been very common in the classic Doctor Who, more so than the new series. Writer Matthew Graham has delivered this first part without any gimmicks or outlandish plot twists. Instead we encounter a very structured story that does not deviate from its formula. The clones begin to get upset with how they are being treated, the Doctor and team sympathize and begin to work with the people in charge in order to create a co-existence. Then it all goes wrong when a clone is killed and the cliffhanger has one of the TARDIS crew duplicates making its existence known. 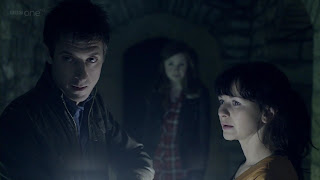 I for one liked this story a lot. The effects of the sun storm were outstanding and beautiful. Rory is given a bigger chunk to do, and at least for now, had more to do than Amy. Matt Smith delivers a well balanced performance that is eccentric but not too wild. The setting and costumes are also the best of the season so far. 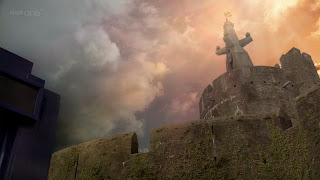 I have little negative to say although the stretching neck scene in the bathroom was stupid and wished it hadn’t happened. The music absolutely grated on me for 80% of the story. It was loud and really did not fit well at all. Right toward the end though a pulsating beat representing the increased tension of the story was simple but very effective and was probably the best music piece of the season so far. It really helped drive home the amped up conclusion.

So we have another part to go and I really hope Graham pulls it off. Graham’s work on Life on Mars was outstanding and yet he has been unable to do much with Doctor Who, having done the sub-par “Fear Hear” a few years ago. He seems to have redeemed himself so far in this one.