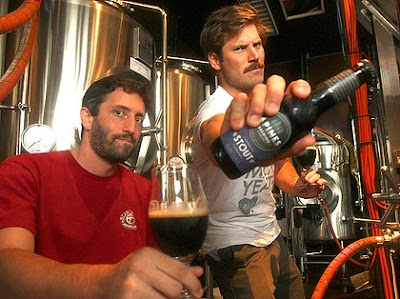 For microbrewers down under, the sky is not the limit. With an eye toward space tourism, they have crafted the first beer designed to be consumed in outer space.

Australians Jaron Mitchell, who owns the 4 Pines Brewing Co., a microbrewery, and Jason Held, who works at the space engineering firm Saber Astronautics Australia, have developed the Vostok 4 Pines Stout.

Among the challenges: coming up with a beer that would be appealing to astronauts experiencing the effects of space, which include a loss of taste sensation. As Held told the Sydney Morning Herald:


"Your face puffs out a little bit, your tongue swells up a little bit - it's not extreme, but kind of like having a bad head cold. So we wanted to have a flavor that would be strong enough, that would punch through that."

Other obstacles remain, such as how to drink from a bottle in zero gravity, determining the effect of alcohol in space (gravity can have an impact on how alcohol is absorbed by the body) and where to return the empties for the deposit money.
Posted by Harvey The Pooka at 1:55 AM