In an incredible coincidence Monday night's episode of Chuck included a scene where Casey (Adam Baldwin) tells Chuck he is going to do some target shooting at a range and shows him his paper targets. 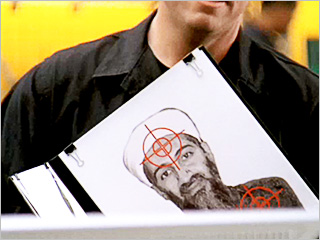 It was reported that Bin Laden was hit twice, once in the chest and once in the head, just like the targets here!!!!
Posted by SHADOKP at 10:35 PM