3-D Movies Are A Fad 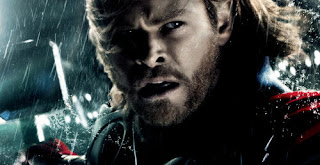 Despite all that has been going on, 3D films are a fad that will die out sooner or later. But it would seem that theaters don’t want this to be the case and are doing anything in their power to keep this gimmick going.

To set the stage, I am a moviegoer who wants the top level quality with best sound and best visuals.  If I am going to the theater, I want to be blown away by these elements.  3D, when done properly, can certainly enhance some movies but in the end it is a gimmick, a way to make lots of money as quickly as possible until the public loses interest.  The quality is subpar and for the most part the visuals are much clearer in a 2-D viewing

The gimmick is the 3-D technique and the fact that it is an expense to the moviegoer and doesn’t always work with everyone is certainly a negative.  Spending $4 more in this economy is not ideal and yet, the latest 3-D has flourished during these hard times.  What are you spending the money on?  The glasses?  No, those are re-used.  The projection equipment and cameras used to make the 3-D, well, yes but really there is a high profit for theaters so this is why they are pushing. 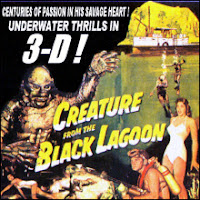 So why this hate of 3-D?  Well, I am all for the choice to watch a film in 3-d or the standard 2-D format. Up to recently this had been relatively easy.  Most films released were in both types of theaters.  Now, a few days ago I went to go see Thor.  My time to see this film was limited to a small window on Tuesday.  I saw it with two people who have vision impairments and they cannot see the 3-D in these movies.  That was coupled with the decision to see it in 2-D and the fact that people, including an actress from the movie, were stating that the 3-D added nothing to the movie.  Okay – so now Rave Cinemas has three showings in one theater for the 2-D Thor – 1:30pm, 5pm and 9pm.  You have got to be kidding me!!!  Most theaters around here have 2-D Thor in one theater and at least 3 for the 3-D showing.  Talk about supporting 3-D.
What better way to boost 3-D box office than eliminate the less expensive 2-D showings and force people to either go to a 3-D showing or to not go at all.  No wonder the 3-D is doing well, the theaters are forcing people's hand.  Many people will just dish out the extra money for a 7pm 3-D showing because they cannot wait to see it at 9pm.
Beyond all the other issues with 3-D including the headaches, dizziness, inferior visuals and the fact that perhaps around 7% of all people cannot see the 3-D, this new style of movie viewing may be systematically being forced upon movie goers. 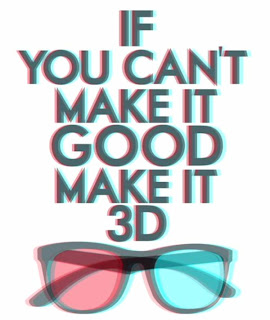 I really don’t expect theaters to do away with 3-D and hopefully 2-D sales will continue to do well.  I really expected this fad to die this year but with more and more injection into homes, it would appear this fad is growing slightly.  Could it be more than a fad, probably not.  Until something is created that eliminates the glasses and has more true depth as opposed to a little trick to fool the eyes into thinking things are 3-D, this current fad will have the same fate as previous 3-D attempts in the 50’s and 80’s.  Till then I continue to pick out a few films I may see in 3-D but the majority I will watch without that expensive trick.
Posted by SHADOKP at 4:50 PM