Doctor Who: The Doctor's Wife Review (Caution Spoilers Within) 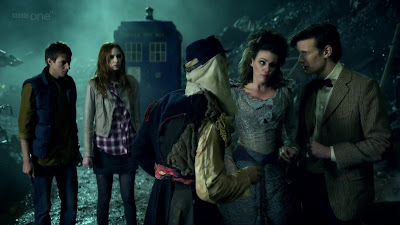 The Doctor's Wife
By Neil Gaiman


Probably one of the most anticipated stories, that isn't a series opener or closer, has finally arrived.When I heard the news last year that Neil Gaiman was writing an episode of Doctor Who I was pretty amazed that someone of his talents would want to write for Doctor Who. As most people know
Neil Gaiman is the writer of such movies as Beowulf, Coraline, and Stardust.  But to his fans he is most recognized for work on The Sandman.  The Sandman is a 75 issue comic book story about Morpheus which is published by Vertigo an imprint of DC Comics. 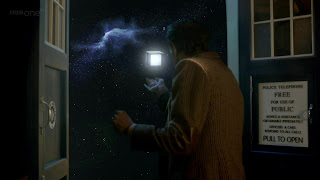 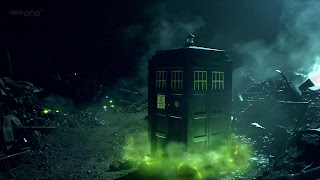 The Doctor's Wife boasted that something from The War Games would be coming back.  Well we have our answer in the appearance of the Timelord Hypercube.  You remember that device that the Second Doctor used to contact the Timelords for help.  Well it's back and there are quite a lot of them too.  This must come as a disappointment for some of those  fans who thought the War Chief was coming back.  But I have to say it was a good plot device to get the Doctor to come to the planet that has the House entity.

After watching the first 5 minutes of this story you quickly realize who the Doctors wife is.  It's the TARDIS.  The Doctor's Wife gives us a chance to see the Doctor and the TARDIS interact.  Since the soul of the TARDIS has been put into Idris this can now happen.  I was blown away by this as the two long time companions finally are talking to each other.  We get to know why he picked this one Type 40 or did he.  This was pretty cool as something like this has never been done on televised Doctor Who before. 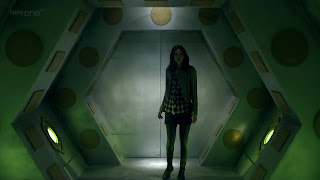 Another cool element of this story is when House has taken over the TARDIS and has Amy and Rory trapped inside him.   Well he uses them as entertainment and they start running through the corridors of the TARDIS.  We finally get to see other rooms in TARDIS.  Granted it is only corridors and the Tenth Doctor's consul room.  But hey we can't be picky.  Those scenes in the corridors were pretty intense as we get to see Amy get mentally tortured.  Yes apparently we see another dead Rory, Oh My God They Killed Kenny err Rory, but even still it works in the Doctor's Wife as it makes it more suspenseful.  Especially when Amy sees all the death threats written all over the wall.  Those scenes has to be some of the scariest in Doctor Who. 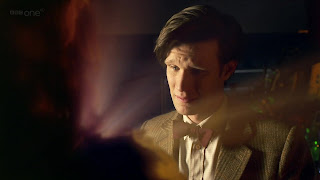 I truly liked this story.  It was different, bizarre, strange, and all together crazy.  I really like stories like this and this one was top notch.  The Doctor's Wife had everything.  From really good dramatic scenes like when the Doctor finds all the Hypercubes or to the heart felt exchange between the TARDIS and The Doctor after House has been exorcised.  This was an all around enjoyable story.  Yes it was strange what with the characters Auntie and Uncle strolling around not making much sense but that is part of the charm.   I also liked the fact that you could not see House.  There is nothing scarier than having an enemy that you can't see but is everywhere. 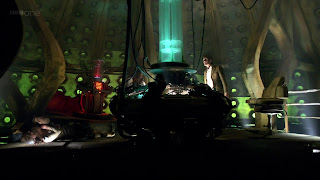 When all is said and done and Matt Smith is no longer in the role of the Doctor The Doctor's Wife will go down as one of the best stories of his era.  I'm sure there will be those that will not like this story because it is pretty complex but the story is pretty simple.  It is the story of a man and the true love of his life.  As Amy says towards torwards the end she is still here when all of us have left.  In all a wonderfully strange and heartfelt episode that so far is my favorite of series 6.
Grade A

Thanks to Doctor Who Media Gallery for the screencaps  http://doctorwhomedia.co.uk/gallery/index.php
Posted by DR5WHO at 6:29 PM

Email ThisBlogThis!Share to TwitterShare to FacebookShare to Pinterest
Labels: doctor who, neil gaiman, review, the doctor's wife, The Sandman