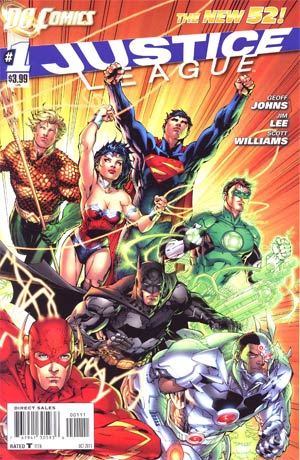 Here it is.  The most anticipated comic book of 2011 DC Comics The New 52's Justice League.  So anticipated that retailers put the book on sale during a midnight madness campaign.  Pretty cool.  So was it worth the hype or was it another failed attempt by


DC Comics. Well I thought it was pretty good.   The story and art work was pretty good nothing less then you would expect from Jim Lee and Geoff Johns.  The story is pretty simple and had enough action in it to satisfy those who love action.  It basically follows Green Lantern and Batman having their first meeting on a roof top in Gotham City.   Batman was chasing an alien that was setting up a bomb to blow things up when Green Lantern showed up to help.  They then discover after fighting the alien that it was doing these acts of terrorism for Darkseid.  Figuring it was of alien origin they two went to Metropolis to ask the other alien on the planet.  Someone they have never met before.  Someone named Superman.

It appears that DC is going back to the beginning.  As it seems none of the heroes have ever met before and do not know one another.  The fact that Green Lantern exclaims to Batman that you do exist was in itself funny.  So far I have no problems with that just as long as they don't bore us to death by revisiting the origins.  Since this just the first part of a multi part story it will be interesting to see how they expand on what has been started.  Like watching the heroes get to know one another and gaining their trust.   Seeing how they will work together for the first time will be interesting enough and seeing what is in reality a new origin of the Justice League could be fun as long as it is not dragged out.

The second part of this book dealt with the origin of Cyborg.  Right now he hasn't had his accident yet and isn't the half robot half human that we all know.  Right now he is a high school senior who has all the football recruiters for the colleges drooling at the prospect of him playing football for them.  It will be interesting to see how this story is incorporated with the Justice League and what role Cyborg will eventually play.

As a first issue goes it justice League was pretty good with a story that is so far pretty entertaining and interesting.  It isn't really for all ages but children above the age of 10 should be able to follow along with no problem as it isn't really complicated at all.  Justice League as the first issue of a reboot had just one flaw to it.  Since we saw the beginning of the book in sneak peak in other books I was disappointed that the book wasn't longer.  Sure they gave us a sketch section of the characters and what they are now but I was expecting just a tad bit more for my $3.99.  Hopefully the next books in the series and the ones coming out next week will be just as entertaining as Justice League was.
Grade B+
Posted by DR5WHO at 7:30 PM