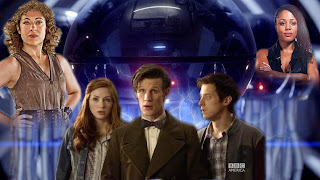 The worst thing about the last episode of Doctor Who, “A Good Man Goes To War” beside the editing, story and over the top, grandstanding and loud, in your face dialog was the title of the next episode, “Let's Kill Hitler!” Would this episode live down to my expectations born out some mediocre stories of late? 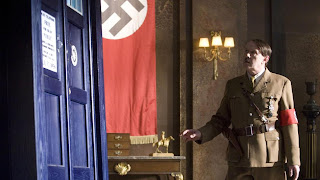 If anyone has read my previous Doctor Who series reviews, you know that I am having trouble with much of what is going on of late with the series. The half season finale was a shambled mess that was all about revealing one answer and had a mish mash of many of the elements that make the show bad right now. Still, I found some good coming out of the first half of the season and am always hopeful that some day Moffat will right this ship and do what made him the best writer for the series in the previous seasons. Until that day happens, we will watch “Let's Kill Hitler!”
I went into this episode having no choice to accept that this show is all about the TARDIS crew characters and less about any particular story other than the gimmicks (Who is River? Who was that girl who regenerated? How is the Doctor going to get out of yet another death? And so on). With that in mind I awaited for a fun romp across Germany with the Doctor and Hitler at each others side with plenty of humor and quirkiness. I am sure many fans would have loved that. Instead, and I give credit for Moffat's direction change, we see Hitler really as a non entity for this story. This harks back to my earlier statement and Moffat is almost parodying it by leading viewers into thinking Doctor Who is always about a new story (killing Hitler, for one) but instead going right back to the River/Melody/Amy/Rory/Doctor relationship. 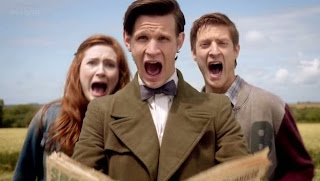 Having accepted that this is what Moffat and most fans want to see, the story does take an interesting path in completing the River story. The reveal that River is Amy's daughter would have been a surprise earlier this year if it wasn't for the fact that the world of Television, especially Doctor Who, immersed in an atmosphere of coincidences, links and conspiracy. Of course River was Amy's daughter, either that or she was the Rani, an alternate regeneration of Donna Noble, or a future Doctor. Just like Amy was either the Doctor and River's daughter, the Rani or some other outlandish theory that only fans can come up with. 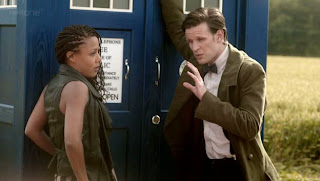 The reveal that Amy has known her daughter, Melody, all this time as a childhood friend is clever. The fact that Melody has been brainwashed to kill the Doctor is an idea that is interesting if not a bit too complicated. The unfolding of the story leads to a pretty good closure on the River Song story. We have come full circle and answered most of those gimmicky teases that River and others have dropped over the past several years. There is really no reason to re-visit them again. Sure, the character of River could still show up from time to time but we have seen her origins and ending and so it is a closed character. Let's move on. 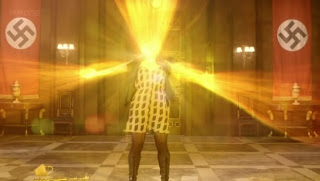 The story isn't over yet as more is revealed about the Silence and the other death of the Doctor that we have already seen. In the old days the Doctor almost died but in the new series, he really does die as do most other characters. If you have to revert to fake death's over and over again to get viewers interested and glued to their chairs week after week, then you are doing something wrong. I am sure Doctor Who fans have become so used to heart breaking deaths that if one were to really happen, most wouldn't care, if they even believed it in the first place.
Most of the other elements in the story were fine and fit in well with the story of River Song. The robot and miniaturized human idea was cool as was the glimpses at Amy's past with her friend Mels. I felt the only way this story would have not turned into that romp through Germany I alluded to earlier was to not do the story at all but the way the Nazis and Hitler were used was just enough not really come into play. I suppose a parting shot with the locked closet and Hitler knocking on it “Please someone let me out” would have been too humorous and I am surprised and relieved Moffat didn't go in that direction.
My enthusiasm for the rest of the season is restored.... for now.
Posted by SHADOKP at 11:44 AM