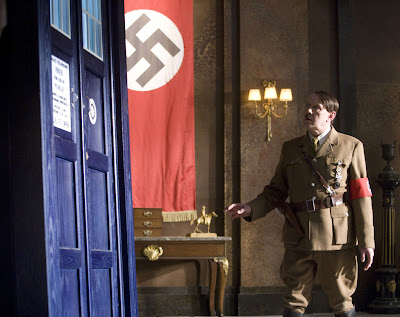 Here it is.  The long wait is over and the second half of series 6 of Doctor Who is here and the highly anticipated Let's Kill Hitler has aired and was it worth the wait hype.  Well I'll tell

you it was a pretty good episode.  What a swerve Steven Moffat did to the fans and complete fooled them with the title.  If anything it got people talking about Doctor Who.  But anyway Let's Kill Hitler was very interesting to say the least story about the origins of River Song.  Since we know how River Song dies it would be only logical to see how she became.   Well what a beginning as Amy's childhood friend turns out and actually regenerates into the River Song we actually know.  But it turns out that she is programmed to kill the Doctor and is successful. 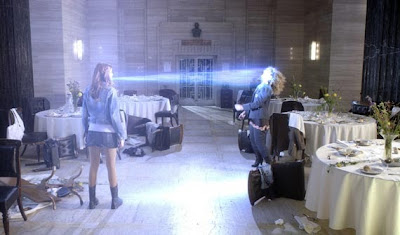 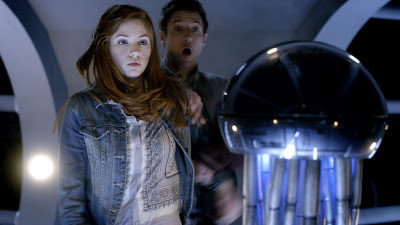 Lets Kill Hitler had an interesting alien or robot the Teselecta.  I thought the Teselecta was pretty cool and different as they used a robot with a minature crew.  I really though it was cool idea but they never explained why you got killed if you didn't have a green light on your wrist band.  Not a major problem but really it would be nice.   The other problem I had with this is did we really need Hitler. I mean the just literally pushed him into the closet and thats it.  They could have made up some space criminal to go after.  But I guess for shock value it worked pretty well.  I really liked this episode and everything that it accomplished.  It tied up the loose end of the girl in NYC regenerating and it gave us more insite on who the Silence are. I also liked how they made River use up her regenerations to save the Doctor keeping her death intact. I liked the emotional struggle the Doctor had with the hologram of little Amy Pond.  Matt Smith was brillant in that scene.  You could see the emotion and hurt on the Doctors face. 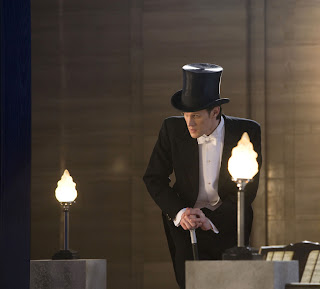 I thought Rory was excellent in this story.  Especially when he delivered the lines of what happened to him and Amy.
Let's Kill Hitler will be known less for it's title and more on the origin of River Song and her relationship with the Doctor.  Plus now we now where she got that diary of hers.  In all a good start to the second half of series 6 of Doctor Who.
Grade A
Posted by DR5WHO at 9:57 PM

Email ThisBlogThis!Share to TwitterShare to FacebookShare to Pinterest
Labels: doctor who, doctor who lets kill hitler