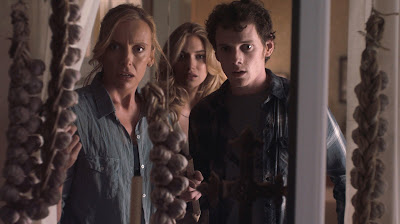 This movie held only a borderline interest for me going into last week. Having David Tennant wasn't a reason for me to see this and certainly being a remake wasn't incentive either. The original was excellent and so this movie had a lot to live up to.
Also being advertised for the 3-D showings didn't make me any more interested in it. Still, a series of excellent to good reviews pushed me over the edge and so I went to watch it.... in 2-D. 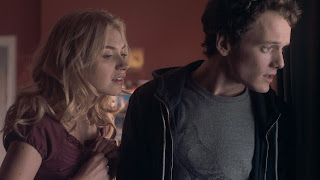 First of, this film was made for the 3-D technology. There are loads of things coming at you and perhaps that would have given all those gimmick lovers something to get excited about. What I was more interested in was the story, performances and how they compare to the original. The story is basically about a tight knit neighborhood who has a new neighbor (Colin Farrell). Seems like a nice hunky guy, except, he's a vampire!! Charlie (Anton Yelchin), living with his mother (Toni Collette) next door, is being hounded by his childhood friend, Ed (Christopher Mintz-Plasse). Ed believes the new guy, Jerry, is a vampire and turns out, he's right. Charlie's girlfriend, Amy (Imogen Poots) is getting fed up with all this weirdness but very quickly everyone is onboard with the whole Jerry the Vampire idea. 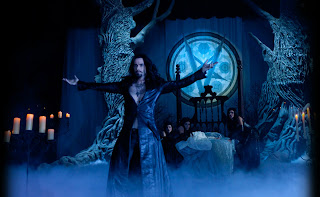 Charlie, desperate to find a way to protect his family and friends, seeks the help from Peter Vincent (David Tennant), a Las Vegas showman who plays a vampire killer on stage. Peter Vincent of course doesn't believe Charlie one bit until more evidence is noticed and that is when the battle against the bloodsucking neighbor and his turned army is waged.
The movie hosts some excellent characters all around. Everyone does a good job and sells the whole plotline. Keep an eye out for a former vampire cameo.  The story is simple and quick. There is little here to find fault with since most of the action takes place within just a couple of days. The effects are good as is the music and other production values. I did mention the 3-D elements and felt that these were overdone and were a distraction as the characters seemingly held things out for the audience to goggle at. 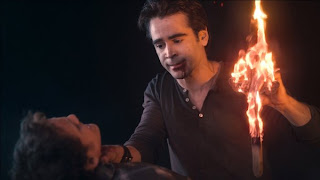 Compared to the original, this movie stands up on its own really well. It is a good update from the 1985 movie. I did feel the 2011 story moved much quicker than the original, but that might be my memory cheating a bit. I also remembered the original having a bit more humor in it. The 2011 version had its fair share of humor but lacking was the excellent original “Evil” Ed (Stephen Geoffreys).
Whether the original was better or not, the 2011 version is a very good film and screams sequel.
Posted by SHADOKP at 7:52 PM