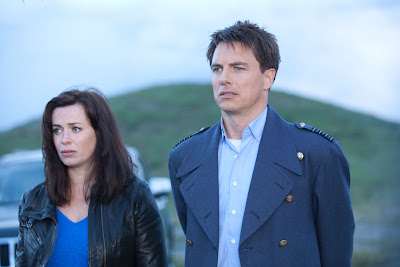 Torchwood: Miracle Day
Epiosode 7 - Immortal Sins
Here we go.  As I watch this episode I was hoping for an explanation of the blessing but more or less I'm more intrigued as to what Gwen would do about Jack and getting her family back.  Well............... 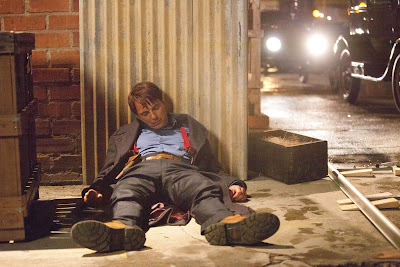 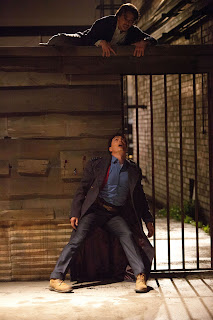 Immortal Sin did throw a few curve balls at us and maybe just maybe gave us an in site into what the blessing is.  The Immortal Sin is broken down into two parts that come together at the end.  One of the halves deals with Jack and his new love interest Angelo.  It appears that Jack has to find a box in a warehouse that has an alien it.  Granted it is 1927 Jack explains that the alien is being sent to Albany where it will infect then Governor of New York Franklin Roosevelt.  This will in turn cause the future President to make some insane decisions to help Germany win WWII.  Then things get interesting when Angelo finds out that Jack can not die and sells Jack.  It turns out that he is tortured in the cellar of the butchery and some of his blood is taken.  I believe this turn of events is what the Blessing may be centered on. 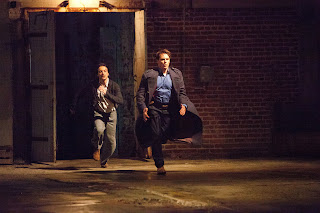 The second half is obviously the Gwen doing what she can to save her family.  It mostly takes place in a car with jack tied up (not what you think) and trying to convince Gwen to let him go.  Well that's it just banter back and forth with yelling and screaming and threats being made.  That is more or less it for that storyline except for the last 5 minutes when the two stories meet and Rex and Esther save Gwen's family in a token appearance.  It appears that Jacks lover Angelo is alive and well and has been waiting for Jack and he knows all about the Blessing.Well this episode took all my theories and tossed them out the window. Immortal Sin was a well crafted scifi  love story in the Torchwood mode.  Which means it's F-uped.  Well F-uped for Torchwood that is.  But it is brilliant.  Immortal sin as an episode sets up the climax (maybe not the best description) very nicely even though it was predictable.  With the Jack and Angelo storyline I would have been disappointed if Nana Visitor had said someone else wanted to see Jack.  It now does raise a lot of questions.  Like is Angelo the one in charge of Phicorp or is the one involved in the Blessing or does Angelo know whose doing.  Or is he still madly in love with Jack that he just wants one more Jack experience.  Well maybe not that last one but with 3 episodes left we will find out soon enough. 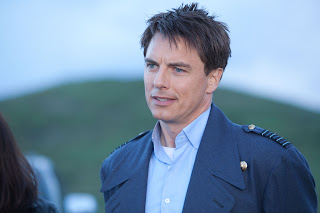 It was good to finally see Captain Jack take center stage.  It seems like he has little to do but be in the back ground and make the token appearance.  John Barrowman puts in a really good performance in Immortal Sin.  Probably one of the best that he has done in Torchwood.  You can really get a sense of the hurt from Angelo's betrayal to Jack from watching it being performed magnificently by John Barrowman as his facial expressions were very good at conveying this.  The Jack and Angelo story is by far one of my favorite.  I think that maybe it closely resembled an old Torchwood episode.  Plus it told a good story and set up the final part and possibly next weeks episode pretty good.  The one problem I did have is that Gwen really just jumped the gun and went off the handle.  It seemed that she was quick to sacrifice Jack without getting his side or to talk it out with him first.  But since I have one child like her I can also see her point of view also.  So in all an episode that doesn't really shock you all that much but it does raise some interesting questions and does set things up for the end three episodes. Grade A
Posted by DR5WHO at 12:47 PM