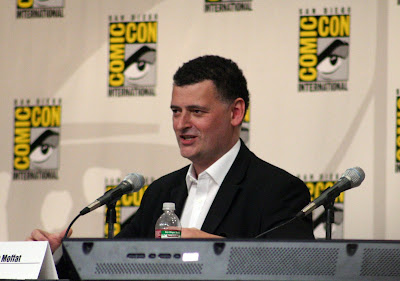 Don't believe everything you read on the Internet. That's according to "Dr. Who" head writer Steven Moffat. (We're reasonably sure he didn't mean our website, though.)

Speaking to the Daily Beast, Moffat responded to "reports of budget cuts being behind the BBC's decision not to air a full season of 'Dr. Who' during 2012:


Absolute nonsense. First of all, we are airing in 2012. The only thing that’s happening is that we’re moving a bit later...There’s lots of reasons for that that will become clear quite soon...It is certainly not a reduced episode count. Do you think the BBC would really let that happen? With an average audience of 10 million?…Doctor Who’s international profile is huge. It’s never been more successful. You’re not going to reduce a show like this. The opposite is going to happen, in fact.

Click on the Daily Best link above for more from Moffatt on Amy Pond, River Song and everyone's favorite time-traveling, unlicensed physician.

Posted by Harvey The Pooka at 2:40 PM

Email ThisBlogThis!Share to TwitterShare to FacebookShare to Pinterest
Labels: Dr Who, Steven Moffat