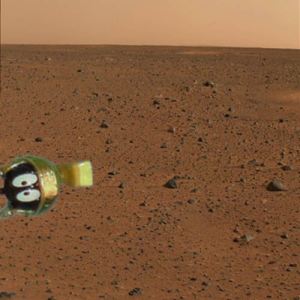 It seems like an odd choice of words to describe something discovered by Curiosity on Mars. But that's exactly what John Grotzinger, principal investigator for the Mars Science Laboratory, said about a recent soil sample test, according to an article by Nancy Atkinson at Universe Today. Grotzinger, in an NPR Today interview, was quoted as saying:

"This data is gonna be one for the history books," he said. "It's looking really good."
The obvious question is "what?" Or, to be more precise, "WHAT?"

For now, the scientists are not saying. They are, after all, scientists who want to be absolutely certain about their discovery before announcing it to the world. That could be weeks away.

Said Joe Palca of NPR:
"They have some exciting new results from one of the rover's instruments. On the one hand, they'd like to tell everybody what they found, but on the other, they have to wait because they want to make sure their results are not just some fluke or error in their instrument."
In the meantime, it's anyone's guess - signs of life? Little green men, maybe?