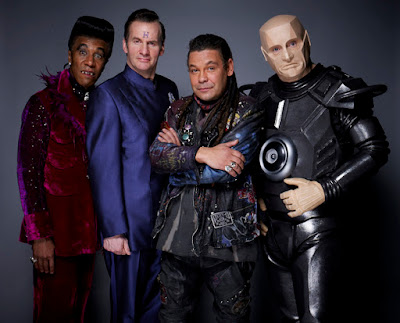 It's looking like Red Dwarf XI might be one step closer to being reality.  Digital Spy is reporting that Grant Naylor is already working on scripts for the next series of Red Dwarf. They were talking with Danny John-Jules who let it out that the scripts were being worked on to avoid time constraints that Naylor faced while writing Red Dwarf X.  Here are his quotes.


"I spoke to Doug the other day, and I know he's already writing outlines," John-Jules said. "Even though the contracts aren't signed, he knows because of the last series [that he needs a head start], because he was under real pressure."

"Directing, writing, producing, and then locations get moved out, actors drop out, and suddenly it's like, 'Well, we've got ten pages that can be filmed and I've got to rewrite four scripts'.

"He doesn't want to be caught like that again, so he's already writing outlines. Well, or scripts - Doug doesn't really do outlines, he just writes a whole script, and then diddles with it."

You can read the full article over at Digital Spy