This year’s SuperMegaFest was, for me, a long journey finally completed.  It all started way back in 1995 when I purchased a cast photo from series 2 of Babylon 5.  Now I believe I bought it at United Fancon to get Jeff Conway’s autograph, well, mainly because there were not any good single photos of him from Babylon 5.  Wasn’t a big Grease fan so was not interested in those and Babylon 5 had just started its second season and was just about to hit it’s big popularity era.

So through the years I was able to get everyone on that photo to sign it except for one person. That one person was Bruce Boxleitner and last Saturday at SuperMegaFest I finally got to meet him and have him sign my cast photo and ending a 15 year crusade.  It was great to meet him and talk about Babylon 5 and of course TRON.  He’s having a blast voicing TRON for the animated series TRON Uprising among many things and was happy to be meeting the fans.  It was a big thrill and sense of accomplishment to finally get that photo completed after so many years.
SuperMegaFest was pretty crowded and had so many guests from the wrestling world, Playboy, comic books and movies and TV from the geek world to keep many of the hordes happy and interested.  It was like a cornucopia of geek interests and on a whole it seemed like everyone was having a good time. Another guest I was interested in seeing was Deep Roy.  Deep Roy is a character actor who has been in Doctor Who as Mr. Sin in Talons of Weng - Chiang and was The Klute in Blakes 7 among other things.  But most of you would know him better as the Oompa Loompa from the Johnny Depp version of Charlie and the Chocolate Factory.  It was great to meet him also since he has been in a lot of geek films. 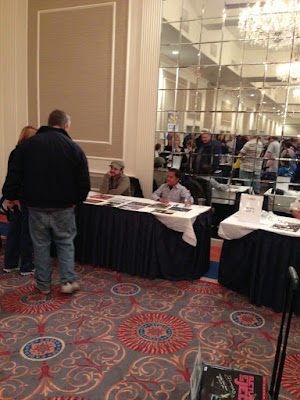 There were lots of stars at SuperMegaFest like Hercules himself Kevin Sorbo, Superman Dean Cain, Rachael froom Blade Runner Sean Young were all there signing autographs and talking to their fans.  Plus the main guest this year was comic book creator, well the most famous creator of all time, Stan Lee.  Stan Lee was there as part of his 90th birthday. I’ll say this I hope to look as good as him and have that type of energy when I’m 90 years old.

This year’s edition of Boston SuperMegaFest was a great time by my friends and me.  There were a lot of good costumes this year to go along with a good lineup of guests. Some were really well done and pretty cool.  It will be interesting to see how they can top themselves for next year’s edition.   Boston Supermegafest was a fun convention to attend and it is one that I look forward to every year.  A great time had by all and will definitely be back next year.

Enjoy some of the pictures from SuperMegaFest from Saturday November 17.