Doctor Who's Jenna Louis Coleman On Being The New Companion 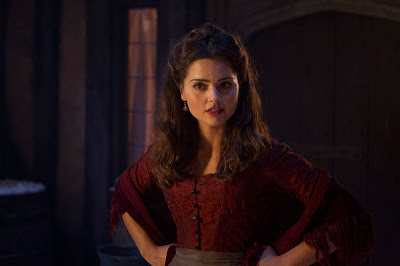 There is an interview up on EW.Com of  New Doctor Who Companion Jenna-Louise Coleman and coincidentally its her first American interview.  In the interview she talks about keeping her appearance in Asylum of the Daleks a secret and the Oswin/Clara conundrum. Here is a snippet.


So, you played an ultimately deceased Dalek on that show and now you are about to debut (again!) on the special Christmas show as the Doctor’s assistant. All of which obviously raises about a thousand questions. Is this a subject that is going to be addressed in the Christmas episode?

Uh… mmm… no. We’re going to have what has been referred to as a “soft mystery.” For me, filming, I’ve been totally oblivious to Oswin and the “Asylum of the Daleks.” I really have had to erase it from my memory. Yeah, Christmas is it’s own episode.

You can read the whole exclusive interview at EW.COM  at the link below.
http://insidetv.ew.com/2012/11/28/doctor-who-jenna-louise-coleman/

Email ThisBlogThis!Share to TwitterShare to FacebookShare to Pinterest
Labels: doctor who, Doctor Who Series 7, Jenna-Louise Coleman