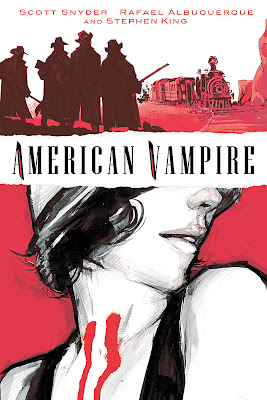 I was tired of the Twilight and Tru Blood hunky and glittery vampires that have been around lately.  I was sick of the dump love story types that have been around and was hoping to find something more traditional.  Well I did find just that.  While perusing the aisles at NYCC this past October I happen across the trade for the American Vampire.  While looking at the cover I was intrigued by the look of it and the description as this seemed to be a different type of vampire story. In fact it seemed to be what I was looking for.

This volume of American Vampire comprised of the first five issues of the comic book series published by DC Comics Vertigo imprint.  There are two stories in each issue.  The first story written by Scott Snyder involves an aspiring actress named Pearl Jones and takes place in Hollywood in 1925.  Pearl unwittedly becomes involved with a Vampire cult.  She gets invited to a party but the bad news for Pearl is that she is the main course.  Before all this she confronts Skinner Sweet.  Skinner Sweet is well a different type of vampire.  His story is covered in the second half story of the book.  But he takes a liking to Pearl even though she is freaked out by him.

Pearl as you can guess is drained of blood by the vampires and thrown out into the desert to die.  She still has some life in her when her friends find her walking on the road.  Skinner sees what has happened to her and decides to save her by putting his blood into her eye thus making her a vampire.  When she awakes in the morgue she heads home where she meets up with Skinner Sweet. He explains how he saved her life and how she is now a vampire like him. Skinner is a special type of vampire that can go out in daylight and more or less have a normal life except with the need for blood.  As he leaves he says have fun getting your revenge.

The second part of the story written by Stephen King involves Skinner Sweet as an outlaw in the old west around 1880’s.  Skinner Sweet is an outlaw who is reckless   He gets in a mix up with the wrong crowed which happens to have a vampire in it.  Well he is being chased by the law but happens to try and rob a train with vampire cult’s money in it.  The thing is the vampire sucks Skinner’s blood while the two are fighting.  But Skinner takes out his gun and shots the vampire in the head which causes his blood to land in Skinner's eye.  It is that freak occurrence which turns Skinner Sweet into a new type of hybrid vampire.  One that can go out in daylight and can only be killed during the darkness of a new moon.   So Skinner is buried and waits for the moment to take his revenge against the vampires and lawman that caused him all the grief. 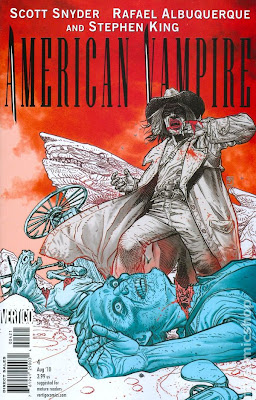 Truth be told I enjoyed American Vampire vol 1 and will buy the next four volumes of the collected editions at some point down the road.  I really enjoyed the characters of Skinner Sweet and Pearl and the story of how they became vampires.  It will be interesting going forth to see how they interact in future storylines.

What helped in my enjoyment is that my new favorite writer Scott Snyder, who writes Batman and Swamp thing for DC, wrote and created American Vampire.  I have been entranced with his work on Batman the past year and a half and now he has gotten me again with American Vampire.  I like how he tells a story and his contribution to American Vampire issues 1 – 5 are the highlight of this collection. I really enjoyed Pearls story and look forward to reading more about her. 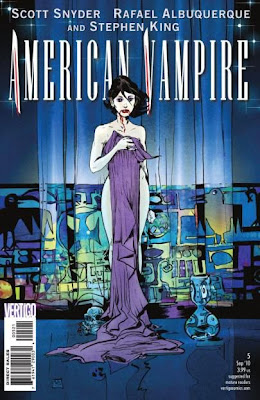 I would be amiss if I didn't comment on the art. Rafael Albuquerque art is pretty good.  He has a different style than the mainstream artist on superhero books which fits the story that is being told in this volume.  Since it is a Vertigo book the art needs to be dark and more adult. I find that he succeeds in doing this which is key to help tell the visual part of the story being told in this comic book collection.

So if you hate the Twilight Vampires or just looking for something new to read than American Vampire is an excellent choice for you to make.  Just to warn you that it is a Vertigo title and it’s intended for adults so don’t let your kids read it.  If the other volumes are as good as this then this will be a fun ride.