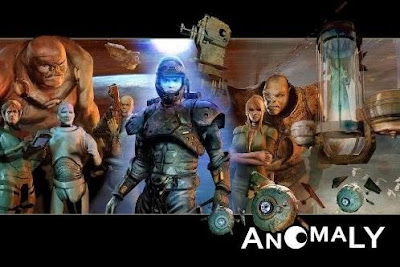 Are you looking for something a little bit different than the normal super hero fanfare from Marvel and DC.  Do you want a graphic novel that you can interact with an iPhone or iPad.  Well if you are then Anomaly is just the graphic novel you have been waiting for.

The story takes place in the year 2717 in what is heralded as The Third Golden Age of Man.  Disgraced elite Enforcer Corps member Jon is looking for a chance to redeem himself and to get out of doing work that they wouldn’t risk a robot to do.  Well he gets his chance in an exhibition to an unknown planet that is dubbed Anomaly.  The problem with Anomaly is that there is a virus that eats metal and makes electronics worthless.  But that isn’t all.  Anomaly has an evil force ruling and none of the tribes on the planet are strong enough to defeat the forces of the evil Erebos.  It’s a tall task and Jon needs to unite the tribes and lead a force that will free Anomaly from Erebos forces.  A task that will be very costly to those involved.

Anomaly is the brain child of Skip Brittenham and Brian Haberlin.  They formed Anomaly Productions and this beautiful graphic novel is their first release.  Like I said it is a beautiful book.  The art is so stunning and breathtaking.  I was really amazed at how awesome the art was in this book.  The art is very detailed and really large scale.  The size of the book really brings out the best in the art.  Since it is the size of a coffee table book it helps bring out the detail and imagery that the artist is trying to convey.  This really helps in telling the story as there is so much imagery to take in and lots of details to pay attention to.   When I opened up Anomaly I was blown away by the art.  It was really awesome and extremely eye catching.  I’m sure when you open this graphic novel up you will be blown away by the art as I was.

The story was rock solid.  For 320 pages of story and art it was really interesting and fun to read.  I really enjoyed the whole scope of the story.  It was an epic sci-fi/ fantasy feel to it.  If you enjoyed Star Wars and Lord of the Rings then you will enjoy Anomaly.  It had that epic feel of a Lord of the Rings type of adventure.  Especially the final battle scenes which really made me feel like I was watching The Return of the King. It was the whole good versus evil and trying to get all the tribes to unite against a common foe was told in a great way.   I really enjoyed this story and was happy to see that it left things open for another story and a continuation of what happened at the beginning of the story.

What is also cool about this graphic novel is that you can interact with it from the Anomaly app.  You can use the app to get 3d images of some of the characters and the ships and stuff like that. Plus you can also have the book read to you by a cast playing the characters like Nana Visitor from Deep Space Nine, Hudson Leick from Xena to name a few.  This is really cool and never done before and it really adds to the overall enjoyment of reading Anomaly.  A pretty cool concept which I believe will be taking off with other books in the future.

So if you are looking for something different with a Tolkien feel to it with a Star Wars edge then I recommend Anomaly.  Even without the interaction app this book has gorgeous art and well-rounded story that is purely enjoyable to read.

For more on Anomaly visit the official website.
http://www.experienceanomaly.com/

Check out the app with this trailer for Anomaly

Email ThisBlogThis!Share to TwitterShare to FacebookShare to Pinterest
Labels: Anomaly