Doctor Who: Voyage to Venus Synopsis 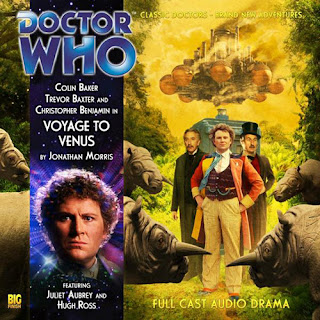 Here is the synopsis for the special Sixth Doctor release with familiar friends Jago and Lightfoot.  Its available now to buy or download
http://www.bigfinish.com/ranges/v/doctor-who---special-releases


Professor Litefoot and Henry Gordon Jago are accustomed to the murky fog of Victorian London and the palatable pints of half and half at the Red Tavern. They are not used to travelling through time and space with their old friend the Doctor.

And now they fined themselves whisked off to the planet Venus in the distant future, at a time when warrior women rule from a floating city in the clouds. There’s a mystery here, one that the Grand Empress Vulpina intends to keep secret. Even if it means destroying these visitors from the long-dead planet Earth...