Merlin Series 5 To Be The Last BBC Announces 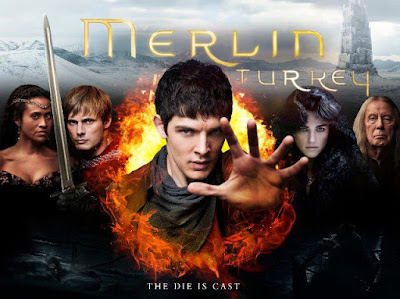 In a press release the BBC have announced that the highly popular and ratings success will wrap up its 5 year story with episode 13 of series 5.  Merlin will wrap up its 5 year retelling of the King Arthur legend with a special two part series finale this Christmas.  There is the chance that there will be a trilogy of Merlin movies that the creators were talking on doing which was announced at San Diego Comic Con.  With Merlin ending this leaves a gap in the fall with Merlin's timeslot. Could Doctor Who be moving in there for the 50th?  Time will tell.  Here is the full press release from the BBC taken from the BBC Media Center.


Date: 26.11.2012Last updated: 26.11.2012 at 13.56
Category: BBC One; Drama
It was announced today that the current series of Merlin will be the last as BBC One’s hit show reaches a spectacular conclusion this Christmas. The epic family fantasy drama will bow out with a special two-part finale, as this unique re-telling of the Arthurian legend reaches its natural and dramatic end – it’s not to be missed!

Merlin has been enthralling audiences on Saturday nights over last five years, consistently attracting an average audience of over six million viewers, with ratings for the current series peaking at 7.1 million.

Merlin has been a firm favourite with BBC One viewers since its first outing in 2008. Celebrated for its magical storytelling, cinematic visual effects and most of all the wonderful cast which includes Colin Morgan as Merlin, Bradley James as Arthur Pendragon, Katie McGrath as Morgana, Angel Coulby as Guinevere, Anthony Head as Uther Pendragon, Richard Wilson as Gaius, and John Hurt as the voice of the Great Dragon.

Co-creators and executive producers, Johnny Capps and Julian Murphy, confirm the current series will be the last: “This is the series where the storylines truly reach their apex. We always felt the story of the legend was best told across five series, leading to a spectacular finale that draws on the best known elements of this much-loved story and brings to a conclusion the battle for Camelot.

"We’d like to thank the amazing cast and crew for their professionalism and dedication, the BBC, FME and all of our partners globally for their incredible support and encouragement across the last five series.

"But chiefly, our thanks go to Merlin’s remarkable and loyal audience around the world for their enthusiasm for the characters and Camelot universe.”

Danny Cohen, Controller, BBC One, said: “Merlin’s mix of magic, adventure and humour quickly became a hit with BBC One audiences and has continued to thrill families over the last five years on Saturday nights. I admire the creators’ decision to end Merlin on a high, but also know that we will miss it in the BBC One schedule.

"On behalf of BBC One I would like to thank Shine and all those involved in the making of the show both on and off screen. I hope fans will tune in over the coming weeks to see the spectacularly dramatic final episodes, and we have ambitious plans for new drama in the Saturday evening slot in 2013.”

Colin Morgan (Merlin) said: “From the beginning this was always going to be a five year journey that we embarked on and I think the show has run its natural course. The show has grown and grown each year and now we’ve arrived at its strongest point and we’ve achieved what we set out to do… I know this is the end, and I know this is goodbye, but thank you for being there on the journey with us because it has been a lot of fun!”

Bradley James (King Arthur) said: “The Merlin years have provided me with fond memories, great experiences and beloved friends and all the while we were supported by a devoted fan base who made the show a unique, surreal and special experience. My words won't do justice to the honour of being King Arthur so I shall just say that it has been an exceptional one and that knowing the show has been a part of so many people's lives, has been humbling."

Katie McGrath (Morgana) said: "I have always said the success of the show has stemmed from our audience being able to relate to the characters on different levels - being based on the universally loved Arthurian legend is only a tiny part of its success - it's a story about acceptance and growing up. The breathtaking finale of this series leaves you with no doubt that characters have been on their journeys and had their stories told - it's completely the right time to draw our telling of the story to a close."

Angel Coulby (Guinevere) said: "It has been a very special and memorable five years making Merlin. I feel extremely proud to have been part of such a brilliant show and such a great team. I think we've told the story we set out to tell, which ends with the fantastic two-part finale by the way! I believe the key to any successful show is making sure you leave people wanting more!"

Richard Wilson (Gaius) said: “Firstly, I would like to say that I'm extremely sad that Merlin has come to an end. Speaking as Gaius, I feel I have mentored the young wizard as far as I can - he is much smarter and greater than me now and I am simply exhausted!"

Series five opened to a Camelot at the height of its ‘golden age’, but a menacing omen overshadows Arthur’s future and unknown threats emerge from within the castle walls. Now everything Merlin has tried to protect is in danger. Albion’s dark trial has begun and the final battle has been joined, but who will survive?

Do not miss the last ever episodes and the dramatic conclusion of Merlin on BBC One, Saturdays at 8pm.

Created and produced by Shine TV, Fremantle Media Enterprises (FME) are an investor in Merlin and hold the exclusive distribution (excluding UK), home entertainment and licensing rights to the property.

As well as the UK, Merlin has also enjoyed phenomenal international success, selling to over 50 broadcasters in 183 countries internationally.