“I told you about the Buddhist monks. They will discover its secret. A caravan that flies. Do you imagine what this will mean to the Khan? It will make him the most powerful ruler the world has ever known. Stronger than Hannibal. Mightier than Alexander the Great.”

One of the more unfortunate things in the history of Doctor Who is that there are missing episodes and in the instance of Marco Polo and for a few others complete missing stories.  Marco Polo is one that is missing for now but there is always the hope that it will be found as Philip Morris is still out there looking.  If you believe the rumors then like me you are under the belief that it has already been found and we might be watching it sometime this year or about as we all know how slow the BBC operates.  But anyway unfortunately Marco Polo only exists in telesnaps that have been reconstructed which you could find on Daily Motion, the audio exists on a CD set released by the BBC a few years ago and then of course there is the Target Novelization which is what will be reviewed here.
The TARDIS has landed in a snowy and cold environment which ends up being a mountain in the Himalayas of Cathay in 1289.  There Susan, Barbara, Ian and The Doctor come across the famed Venetian Marco Polo who is on the way to see Kublai Khan at his Summer home in Cathay.  The Doctor is thankful to Marco Polo for helping them in the mountain as the TARDIS has broken down and needs a power circuit repaired.  While that is happening the TARDIS has no heat so staying in there would be no choice at all for survival. 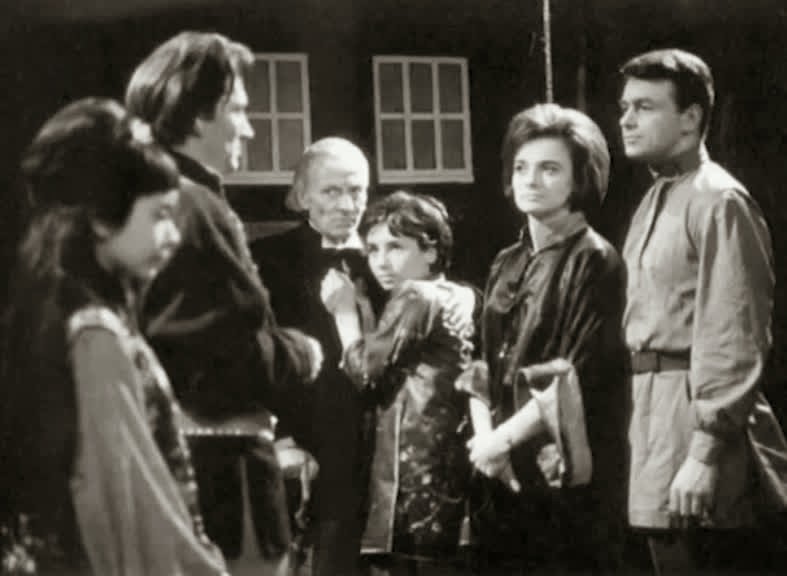 Marco Polo in return has taken the TARDIS to give as a gift to the Great Kublai Khan as the TARDIS would make him the most powerful man on Earth.  The Doctor is incensed.  While grateful for the aid from Marco Polo he is angry that his TARDIS is now part of a caravan of gifts for Kublai Kahn.  But it is The Doctors own fault and arrogance that got the TARDIS taken from him including the keys to his ship and he must find a way of getting the TARDIS back.  But that is not the only thing the travelers have to worry about as the Warlord Tegana is plotting to attack Kublai Khan and take over and to get his lands back.  There is nothing Tegana will not do to disrupt Marco Polo’s caravan and that includes stealing the TARDIS himself so it is up to The Doctor to find a way to stop Tegana and to save the mighty Kublai Khan.

Marco Polo is not the typical First Doctor story. For one it does not follow that tried but true formula of get captured, escape, get captured escape and rinse and repeat. Instead we are on a journey to Kublai Khan’s palace where things happen.  Like Susan and Ping Cho following Tegana and getting caught in a sandstorm or Barbara getting captured in the Cave of 500 Eyes while following Tegana.  Get the sense of a theme here.  The problem I think when watching this story is that it will be boring and very drawn out.  I got that impression from reading the book and wonder to myself why could this not be a four part serial.   But you have to remember that back then they were filling a 42 week episode season so you needed a lot of filler back then.

The story on a whole was pretty entertaining and enjoyable to read.  It was fun to read and the advantage with the book over the televised version is that the original author John Lucarotti was able to expand on the original story and add stuff that he was not able to do on TV in 1964.  The story was pretty interesting and I found the whole Tegana trying to sabotage Marco Polo’s caravan with the TARDIS crew the only ones wise to what was going on to be the best part of the story.  Also watching The Doctor out of his element and trying to persuade Marco Polo to give him back his key and the TARDIS just seemed to be very surprising considering how formidable The Doctor is and seeing him frustrated and flustered over the situation was clearly a side we are not used to seeing in The Doctor.

Another thing about Marco Polo is that it has a bit of humor to it especially the scenes between The Doctor and Kublai Khan.  It will be good if this story is found so we can see William Hartnell flex his comedy muscle during a period of the show where he was in good health.  I really want to see the look on his face when he comes back from playing backgammon and telling Ian and Barbara that he lost the TARDIS in that game after boasting how confident he was beforehand.   The comedy aspect is something I was not expecting and in fact come towards the end of the book as the story had been a pretty serious one till that point.  In fact it was a welcome change of pace at this point.

Marco Polo is an entertaining book that gives us a window into the world of this season one missing episode.  Without the novelization we would not have any idea what this story would be about except from word of mouth from those that were lucky enough to see it.  So if you can find the Target Novelization of Marco Polo give it a read and enjoy one of the earlier stories in Doctor Who’s history that is sadly still missing at this time.