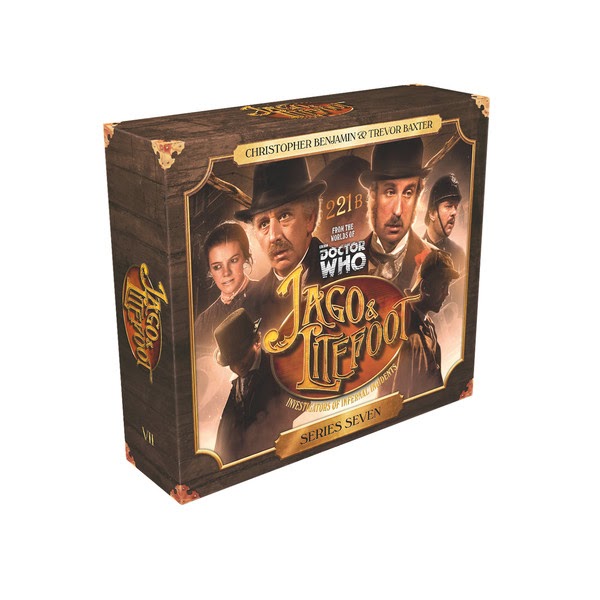 The 7th box set of adventures for Jago & Litefoot will be out in April.  The popular duo from the Tom Baker story The Talons of Weing - Chiang will encounter Conan Doyle and the return of Leela.  You can get this release from the Big Finish website.
http://bigfinish.com/releases/v/jago-litefoot-series-seven-box-set-818

7.1 The Monstrous Menagerie by Jonathan Morris

Jago and Litefoot are on the run! Framed for a crime they didn’t commit, the infernal investigators seek refuge in a house on Baker Street owned by their old friend, Professor Dark.

That’s when Doctor Arthur Conan Doyle enters their lives. Tired of his popular creation Sherlock Holmes, Doyle has moved onto other works that he considers more worthy.

And then Laura Lyons comes knocking at the door…

With a murderous beast on the loose, Jago, Litefoot, Ellie and Leela are trapped in Baker Street.

There is a story to tell, and the four of them put on a show for each other. Their pasts will be unfolded, secrets will be told…

And the last act will be a killer.

7.3 Murder at Moorsey Manor by Simon Barnard and Paul Morris

Jago and Litefoot visit Moorsey Manor, hoping to get help from the only man who can help them clear their names.

They arrive at a gathering of Sherlock Holmes fans, who are mourning the death of their idol at Reichenbach Falls.

Then death arrives at Moorsey Manor, in the most ingenious of ways…

7.4 The Wax Princess by Justin Richards

The past has come back to haunt former chief inspector Abberline - Jack the Ripper has escaped from custody!

As the notorious killer strikes again in London, Jago and Litefoot are drawn into a web of intrigue.
One that will lead to the palace itself...