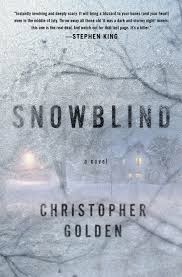 
Snowstorms in New England can be exciting and terrifying at the same time. The potential of losing power, being stuck somewhere and cut off from others are certainly a danger that one must prepare for in these situations. Now thanks to Christopher Golden, he has given us more to be afraid of.

The town of Coventry remembers the storm of twelve years ago. People perished and no one has forgotten. This latest storm is reminding them all of that night when something in the storm took fathers, mothers and sons from their loved ones. Is it possible that whatever evil was in that storm twelve years ago is back? Why are some people acting strange and did one of the dead call his daughter on the phone?

Christopher Golden has presented us a story, in the vein of Stephen King, of characters who face life and death but are given a chance to see their lost family members again. The snow and cold of winter is so much more than what it usually is. There is something living in the storm, taking lives, and is back for more.

The story certainly sets up the atmosphere perfectly with that pre-storm silence and excitement. The descriptions of snow and cold are dead on and this reader relates and understands the feeling that they are meant to convey.

The variety of characters give the reader different types of losses and loves to experience. Joe Keenan feels responsible for the death of a boy, Jake, the death of his brother and TJ, his mother. Whatever took their loved ones away from them would haunt them forever but after twelve years, reminders of that night return with a vengeance.

In terms of scares, the book has them. Golden is also very good a setting the atmosphere and giving you the chills. His descriptions of the snow piling up on windowsills and the cold air buffeting houses really puts this book on a new level. I can relate to it as I grew up and live in New England but his descriptions put me into those situations even if I am safe and warm in bed.

He has taken a fairly large amount of characters and brought them to life just enough to care about them and their encounters during the second storm. Often with books I try to imagine what other medium they would function in and I could see this as a TV movie. I could also see the idea of this book in any TV series like Grimm, The X-Files, Supernatural and Sleepy Hollow. This is not to say that Golden got this idea from these types of shows but more that the idea is generic enough to fit right in to mainstream products.

The book has some great build up and his final confrontation is exciting and more conducive to one of those above TV series as we have a pay off “battle” in the snow near the end of the novel.


What I absolutely loved about this book more than anything was that we are not given a clean cut answer. What is in the storm and what happened to the people is clear enough but there is not a back story of much depth. There is not a curse or explained reason behind it. It just is what it is and the characters of the book have to live or die with it. When something is not explained it is even more terrifying because it could happen again without any reason.
Posted by SHADOKP at 6:54 PM