What Other Missing Shows Could Be Found? Part Two 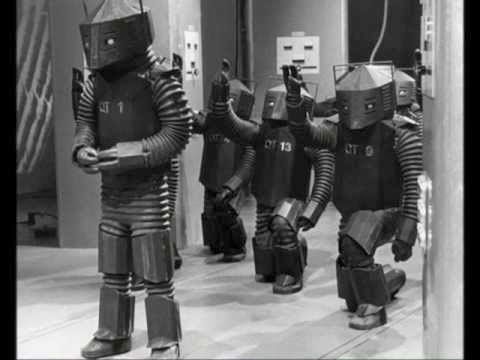 Welcome to part 2 of this article series. When I took this article on I figured I could easily come up with a fairly detailed list of sci-fi fantasy tv shows from Britain that are incomplete or missing that we might see recovered.  If these rumors of a huge find of film cans is even partially true, we could be looking at a massive about of recovered TV.

While I found many very informative websites, it was very difficult to compile this list as there are so many shows out there missing. I was hoping to find a definitive site and one that could perhaps come up with an estimate of what percentage is missing.  Of course what is missing and what can be recovered are two different animals.  So much live TV is gone forever.  These early teleplays and the like were only meant to be shown once and the value of these productions was not seen back before the late 50's.  beyond historical value, nothing was ever shown again and so what was the point.  The invention of the video tape changed all that and recordings were made for documentation.

Unfortunately the value was still not realized and orders to junk many of the video tapes were made. Thankfully telecine was done, copying videos onto film for sales abroad.  This process would end up saving the vast majority of British TV that had been previously junked.  Most if not all of Doctor Who's original video tapes from the 60's are gone and everything that exists is from film.

It might seem odd to read an article about these lost treasures from someone who never seen them, coming from America.  I became fascinated with British sci-fi in my younger years and actively sought to see as much of it as I could.  There is so much still out there to see and if these rumors are true, much much more to come.

So here are some more series, most of which I have never personally seen, that sound interesting.

Not a sci-fi series but of interest to Doctor Who fans as Wendy Padbury was in this show.

What is missing? - all 8 episodes from the first two seasons exist and then 51 episodes from seasons 3-5 are gone. Seasons 6-8 exist.

Never heard of this series until researching this article. This and so many other series have no episodes that exist.

What is missing? - Sure, there are only 8 episodes but nothing exists from this series.

This sci-fi anthology series is high on my list of things I want to see.

This is the first of a series of serials that Nigel Kneale worked on all concerning Dr. Quatermass and his adventures in the realm of sci-fi. The majority of the Quatermass serials exist apart from episodes 3-6 of The Quatermass Experiment. Unfortunately due to low ratings records report that those episodes were never recorded – they went out live and that was it. Now could the records be wrong, probably not but I still include it on my list.

A short sci-fi series starring Michael Craze (Ben from Doctor Who). This series launched several Pathfinder series that are all complete and available on DVD.

What is missing – all 6 episodes

One of Gerry Anderson's (Thunderbirds, Space: 1999) first work and his first puppet series is of interest to me being a fan. It is about the adventures of a toy doll.

What is missing – 51 of 52 short episodes no longer exist.

These and other shows are basically broadcast plays, mostly live that feature some great and early talent in Britain. It would appear that most of these went out live and were perhaps broadcast again live but without ever being recorded. It is possible that some were recorded to tele-cine for distribution and if so, more of these could be found.

A few of these sound interesting including Nigel Kneale's Number Three (1953) and The Creature (1955). Also of interest is The Voices (1955) and  The Greatest Man in the World (1958) which stared Patrick McGoohan.

This tale, by Nigel Kneale is probably my personal holy grail beyond Doctor Who. I have read and heard about this story about the investigations of ghosts from the future. I would love to see this more than most.

This game show is nothing I would be interested in seeing apart from the Captain Scarlet themed episode which included an appearance by Captain Scarlet himself as well as The Spectrum, a group that sang the main theme.

For every show mentioned here there are 10 more that I did not include. Obviously a find as rumored would include hundreds if not thousands of episodes of British television and one would never be able to see all of it. We would hope that the majority of the recovered stories would eventually be available, if not on DVD then at least online. In addition to all the sci-fi stuff, it is tempting to watch series with connections to performers from our favorite series. Imagine seeing more of Wendy Padbury or Patrick Troughton. There are shows with Peter Cushing, Donald Pleasence, Michael Caine and Michael Gough from before they were very famous.

I was amazed to see so much on youtube that I might watch some of the shows that aren't missing anything. For years I watched lots of British sci-fi and fantasy but have only scratched the surface of what is out there. Fingers crossed for our favorites and for people who grew up watching this stuff, you know what is good or not and what you would love to see.

Email ThisBlogThis!Share to TwitterShare to FacebookShare to Pinterest
Labels: doctor who, Doctor Who missing episodes, missing episodes, Nigel Kneale, Out of the unknown, Out of this world, Peter Cushing, Target Luna, The Freewheelers, The Quatermass Experiment, The Road, Twizzle