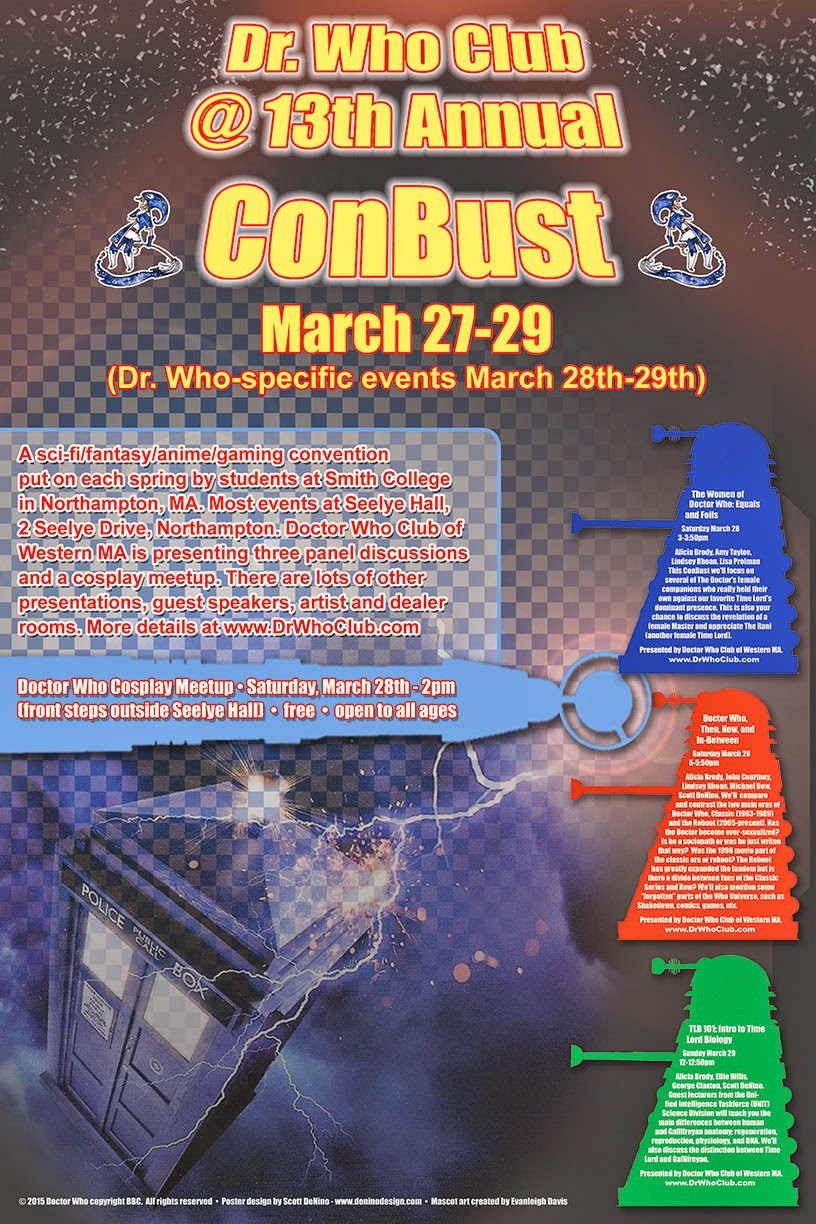 Conbust is a sci-fi/fantasy/anime/gaming convention put on each spring by students at Smith College in Northampton, Massachusetts. This three-day event provides fans of various geekdoms the opportunity to gather and enjoy their interests as a whole. Panels and workshops, as well as many artists, vendors, and tabletop/LARP games, can be found in great abundance throughout the weekend. And of course, we have a fabulous array of guests who will be attending and presenting panels.

What sets ConBust apart from most other sci-fi, fantasy, anime, and/or gaming conventions is its focus on the female members of the participating community. While the various realms of geekdom remain stereotypically male-dominated, ConBust is held to celebrate the work and participation of women amongst these genres.

DW events include:
Lots of other panels on various subjects and artist/dealer rooms!

http://sophia.smith.edu/conbust
Dr. Who Club at Conbust poster by Scott Denino www.deninodesign.com
Convention Times Fri: 5:30pm-midnight; Sat: 9:30am-11pm; One Dance to Rule Them All: 9pm-midnight; Sun: 9:30am-4pm
Artist/Dealer Room Times Fri: 7pm-9:30pm; Sat: 9:30am-8pm; Sun: 9am-4pm
If you want to take a look at one of our past panels, check out www.youtube.com/whovianist (please note, room sizes/configurations may vary)

The Women of Doctor Who: Equals and Foils Saturday March 28 3-3:50pm Alicia Brody (moderator), Amy Tayloe, Lindsey Rhoan, Lisa Prolman. This ConBust we’ll focus on several of The Doctor’s female companions who really held their own against our favorite Time Lord’s dominant presence. This is also your chance to discuss the revelation of a female Master and appreciate The Rani (another female Time Lord). Presented by Doctor Who Club of Western MA. www.DrWhoClub.com

Doctor Who, Then, Now and In-Between Saturday March 28 5-5:50pm Alicia Brody, John Courtney, Lindsey Rhoan, Michael Dow (moderator), Scott DeNino. We’ll compare and contrast the two main eras of Doctor Who, Classic (1963-1989) and the Reboot (2005-present). Has the Doctor become over-sexualized? Is he a sociopath or was he just written that way? Was the 1996 movie part of the classic era or reboot? The Reboot has greatly expanded the fandom but is there a divide between fans of the Classic Series and New? We’ll also mention some “forgotten” parts of the Who Universe, such as Shakedown, comics, games, etc. This talk is presented by Dr. Who Club of Western MA. www.DrWhoClub.com
TLB 101: Intro to Time Lord Biology
Sunday March 29 12-12:50pm Alicia Brody (moderator), Ellie Hillis, George Claxton, Scott DeNino. Guest lecturers from the Unified Intelligence Taskforce (UNIT) Science Division will teach you the main differences between human and Gallifreyan anatomy; regeneration, reproduction, physiology, and DNA. We’ll also discuss the distinction between Time Lord and Gallifreyan. Presented by Doctor Who Club of Western MA.www.DrWhoClub.com

Registration is available at the Con each day. See their website for details. http://sophia.smith.edu/conbust/register.html

Email ThisBlogThis!Share to TwitterShare to FacebookShare to Pinterest
Labels: ConBust, doctor who