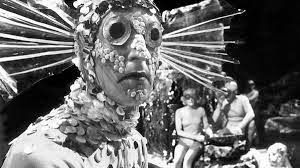 As you might be aware, there was one more classic Doctor Who DVD set for release but for some reason it keeps being postponed and now canceled.  Not sure what the reason is.  One is that the range of Doctor Who does not make enough money - this is totally false due to the money that the previous releases made.  Could it be that the BBC are giving up on DVD and going for a digital release, or that they are waiting to see if Phil Morris has more episodes to return or there is a plan to release other stories that are missing a couple of episodes?  Whatever the reason, The Underwater Menace is being held up and it is making a very people upset.

One of those persons is Anneke Wills, who played the companion Polly during the First and Second Doctors.  This is one of her episodes and recently she tweeted that she has recorded a commentary and extras and wanted to sign a petition to get the release going.  Well, here it is folks.  Let's go ahead and get this released and perhaps others will follow.