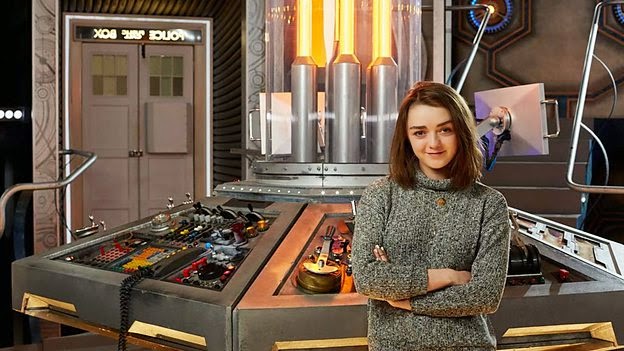 Maisie Williams who plays Arya Stark in Game of Thrones has been revealed as a guest star in series 9 on Doctor Who.  Announced today on the BBC Doctor Who Twitter feed it has been revealed that she has begun filming the episode that features her today and this is great news as she is one of the best newcomers in the acting field.   Doctor Who stars Peter Capaldi and Jenna Coleman and returns this Fall.  You can read the full press release below.

Having landed back in the UK fresh from touring the US, today Maisie Williams sets foot on
the Doctor Who TARDIS to take up a guest role in the hit BBC One show that returns to our screens this autumn.

Maisie has already found global fame and is renowned for her role as Arya Stark in the international fantasy drama series Game of Thrones. She also starred in the one-off docu-drama Cyberbully and was cast as one of the leads of Carol Morley’s drama The Falling. As well as being a three-time Screen Actors Guild Awards nominee, in February of this year she was awarded with a Shooting Star Award at the Berlin Film Festival.

On her first day on set, Maisie Williams said: “I'm so excited to be working on Doctor Who as it’s such a big and important part of British Culture. I can’t wait to meet the cast and crew and start filming, especially as we’ll be shooting not too far from my home town.”

Steven Moffat, lead writer and Executive Producer, added: “We’re thrilled to have Maisie Williams joining us on Doctor Who. It’s not possible to say too much about who or what she’s playing, but she is going to challenge the Doctor in very unexpected ways. This time he might just be out of his depth, and we know Maisie is going to give him exactly the right sort of hell.”

Doctor Who has had a decade of success since its re-launch and is one of BBC One’s most highly regarded dramas. The much-loved brand is already a phenomenon delivering on a global scale, with the last series’ (series 8) consolidated average at 7.4 million.

The BBC Cymru Wales-produced drama will return to BBC One this autumn with further casting to be announced in due course.

Email ThisBlogThis!Share to TwitterShare to FacebookShare to Pinterest
Labels: doctor who, Doctor Who Series 9, Maisie Williams