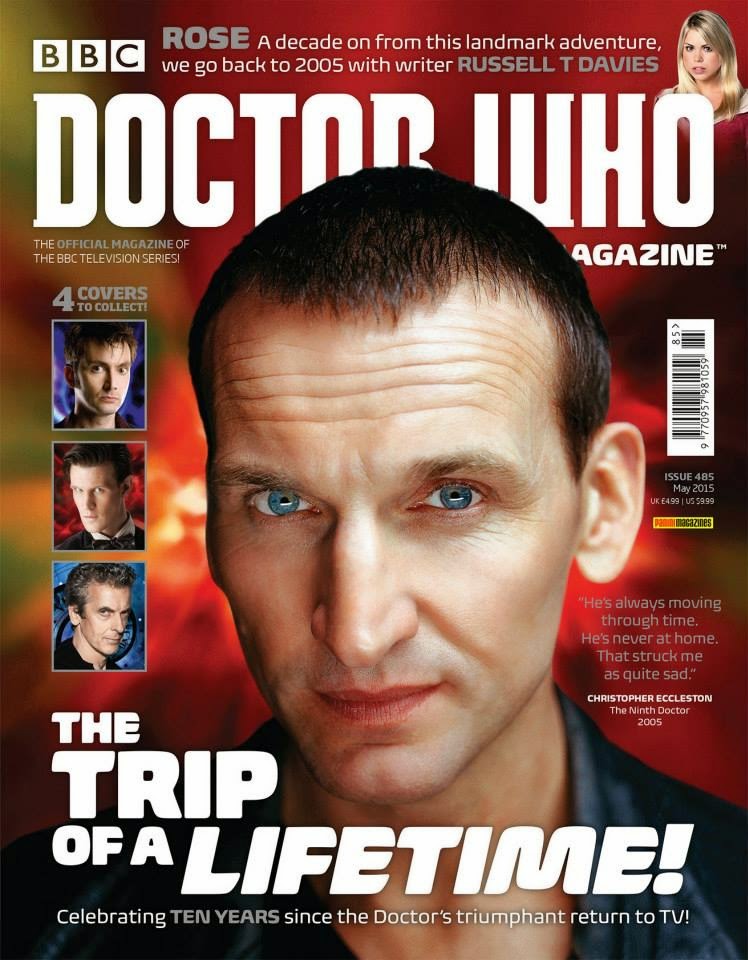 To celebrate NuWho's 10th anniversary Doctor Who Magazine will be releasing four covers to mark the event. The four covers showcase the NuWho Doctors Christopher Eccleston, David Tennant, Matt Smith and Peter Capaldi. The issue will be out April 2nd in the UK.  Below is the information of what the issue will contain.

Ten years after the Ninth Doctor (Christopher Eccleston) grabbed the arm of Rose Tyler (Billie Piper) and told her to “Run!”, Doctor Who is still going strong, as one of the greatest TV success stories of the past decade. Doctor Who Magazine celebrates this milestone with a special commemorative issue that comes with four different covers, each one featuring one of the twenty-first century Doctors – Christopher Eccleston, David Tennant, Matt Smith and Peter Capaldi!

Inside the issue, we look back on the show’s success, with contributions from writers Steven Moffat, Mark Gatiss, Robert Shearman, Paul Cornell, Toby Whithouse, Gareth Roberts, Chris Chibnall, Peter Harness and Jamie Mathieson, as well as from BBC Head of Drama Commissioning Ben Stephenson, who gives his view on the future of Doctor Who…

Russell T Davies, the writer of the landmark first episode, Rose, and many other episodes since, looks back on his first Doctor Who script, and shares brand new information about bringing the Doctor back to our screens.

Doctor Who‘s first ever director, Waris Hussein, concludes his look back over the epic lost adventure from 1964, Marco Polo.

Steven Moffat answer readers’ questions – and speculates about Osgood’s family connections!
Jacqueline Rayner reflects on what life would have been like if Doctor Who had never returned in Relative Dimensions.

The DWM Review assesses the very latest Doctor Who audio and book releases.

The Watcher reveals the connection between Doctor Who and Dr Carl Sagan, in the latest Wotcha!

The DWM Crossword, prize-winning competitions, official news and much more!