Doctor Who - The Widow's Assassin Reviewed By @Blackadder345 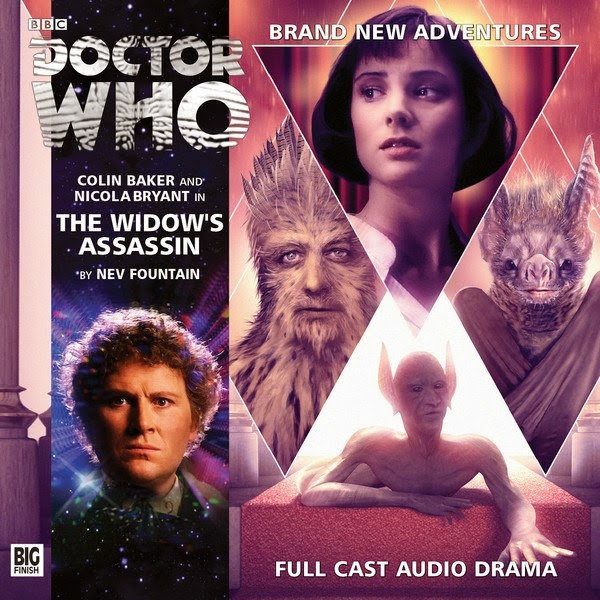 Doctor Who:
The Widow’s Assassin Review
Reviewed By Will Barber – Taylor

Once, long ago, in a land of monsters and corridors, a fair maiden was captured and placed in a deep sleep. She was used to being captured and she had a hero who rescued her on just such occasions. But this time the hero never came. And the fair maiden slept on.

Eventually, a King rescued the maiden, and made her his bride, which many wise old women might tell you are just another way of capturing fair maidens. And still the fair maiden slept on.

Then, the hero had another stab at rescuing the maiden from her prison but he was too late. And, more importantly, he had forgotten the rules of fairy tales.

He didn’t slay the dragon.

take itself too seriously while doing it. While Fountain’s plot is dramatic it doesn’t make the listener feel as though all is doom and gloom; in fact some of the story’s best moments are comic in nature. Good examples include the opening with Guard 1 and Guard 2 , this is played brilliantly by Andrew Dickens and John Banks respectively. The scenes featuring Baron Pteratrar who has some great one liners throughout the story such as “I will now stalk angrily from this place with my cape flapping”. Fountain’s wide range of characters also helps to keep the plot going. They are so individualistic and interesting that you want to keep listening until you know what will happen to them and if they will succeed in their individual stories which all cross through and connect with the main story.

The acting is also fantastic. Special praise must go to Nicola Bryant and Colin Baker for their superb dexterity. Both manage to play their parts excellently and also manage to look at The Doctor and Peri’s relationship in a much deeper way than has been done before. Bryant in particular gives a resounding performance of Peri, one of her best yet, and makes the character feel much more palpable and interesting than she did in some of her TV stories.

Baker’s Doctor is also brilliant, with the Sixth Doctor seems to be a much more likeable character thanks to his various Big Finish appearances. The blustering and arrogance is still there but it is much softer and allows Baker to show a much more

The Widow’s Assassin is a fantastic Doctor Who audiobook which I would highly recommend. It is a space thriller with a witty sense of humour and great central performances. It is a story that will shock you with its twists and delight you with its comedy. A must have for any fan of Big Finish and Doctor Who.
Posted by DR5WHO at 9:28 AM