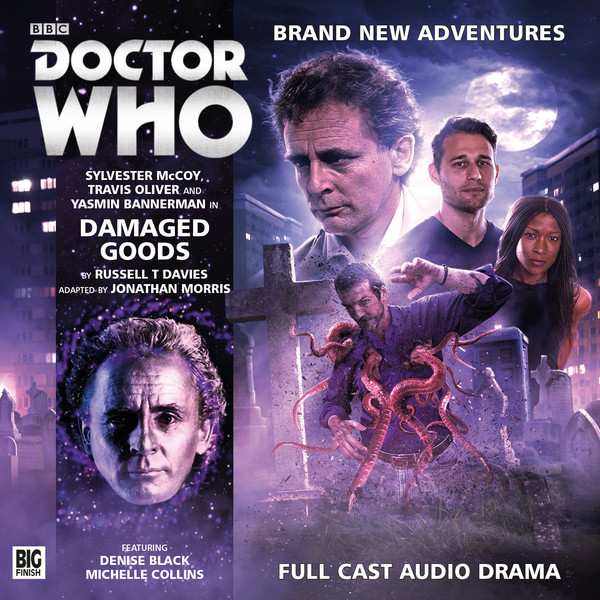 After listening to the audio adventure Damaged Goods based on the Virgin New Adventure novel by future Doctor Who showrunner Russell T. Davies (released in October 1996) all I could think was, “What a wasted opportunity.”   By listening to this story I could not believe it was by the same guy who got Doctor Who back on the air and made it into a romance novel half of the time.  Now granted there were some good stories during the RTD era but they were done by other writers.  He turned a show that was mainly science fiction and added the Buffy Element of relationships and love interests.  That’s fine for the companions but I was never that keen on seeing The Doctor as being a love interest and that includes Moffat’s 11th Doctor River Song storyline.  So when you hear Damaged Goods and here how different it is from his televised Doctor Who you just have to shake your head and wonder what if.

I remember reading this book way back in 1996 but could not for the like of me remember much of it. I was going to reread it before the new series debuted back in 2005 and part of me is glad I didn’t as I would probably have been pretty mad at the time seeing what could have been to seeing what we got.  Now I am a fan of the new series but I do have problems with it as I already have mentioned.  But I wonder how the series would have been like if RTD went the route of Damaged Goods.   For one it would be a lot more violent and darker than it is now.   Damaged Goods also has a lot more emphasis on science fiction than the new show does.  Damaged Goods is a really good story and it is hard to believe that it comes from Russell T. Davies considering his track record.

I loved how Damaged Goods opened up with The Doctor in the shadows watching what is going on.  If you remember this Doctor from the New Adventures series you know that he is the planning and manipulating Doctor that puts clues for him to find to help him along or for his companions.   This time it happens in reverse as he has no clue what is going on even if he’s been seen by Winnie Tyler 7 years prior.  Not much surprises this 7th Doctor so it was good to see him trying to figure out what is going on.  It doesn’t take long as there are two problems.  One an ancient Gallifreyan weapon from the Vampire Wars is on Earth and spreading out its influence for a potential attack on Earth due to faulty programming making it believe that the war is still going on.  Second is a little boy Gabriel Tyler who seems to have developed mental powers as people see him differently and he can easily manipulate you into doing stuff with his mind.  Gabriel is the main problem The Doctor must stop and to make matters worse he has a twin brother who seems to be dying which complicates matters as The Doctor would say.

Damaged Goods brought to life the New Adventures companion Roz Forrester and Chris Cwej.  They are a pair of cops from the future that The Doctor decided to take along with him on his travels.  This is pretty cool of Big Finish to bring them along and make them canon.  Now we can have stories of the 7th Doctor with Roz and Cwej and hopefully added to the main range or in their own spinoff before they meet The Doctor.  But adding them does open up a bigger scene for the 7th Doctor as we don’t have to be bogged down with Ace stories now we have a few more options for the 7th Doctor and that would be really needed right now.

I really enjoyed Damaged Goods as it was a really good story with lots going on.  It had that air of mystery and you really had to pay attention to what was going on.   This didn’t hamper the story as Damaged Goods was really interesting and hooked me in from the beginning that I paid really good attention as I wanted to know what happens next. Big Finish really captured the feel of the Virgin era with this release as the adaption was pretty faithful to the style of 90’s Doctor Who and hopefully it continues.

What is strange about Damaged Goods is that is has a good ending and not the usual cope out ending RTD used a lot in the new series.  No reset button or anything like that but an ending in which The Doctor uses his wits to save the day.  Glad he didn’t have him wave the sonic screwdriver in the air for a solution.  That’s why it was frustrating listen to this story.  This story is written so well and is so unlike RTD that you wonder why he couldn’t write like this for Televised Who.   Damaged Goods is one of my favorite audios from Big Finish this year and its funny that it came from the guy who wrote a lot of the stories from NuWho that I just don’t care for.
Grade A