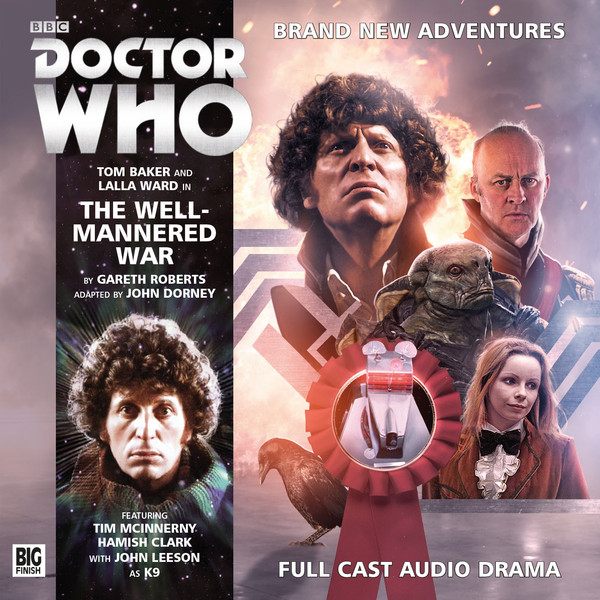 The Doctor and Romana make an emergency landing when they came to close to the end of the time vortex.   They end up landing on the planet Barclow which is laid claim by two factions the humans and Chelonians.  The two forces have been at war over this planet for a long time.  The only problem is they have been very polite about it and the two commanders are best friends.  Sounds like the ideal planet for The Doctor and Romana to land on as there doesn’t appear to be any conflict for them to help resolve.  Or is there?  There appears to be a dark force involved that is trying to make the war something more than friendly and The Doctor might not be able to stop it.

The Well - Mannered War is the audio adaptation of the book of the same name.  It came out in April of 1997 and was the thirty third and last Missing Adventure published by Virgin.  The Doctor Who License for publishing books went back to the BBC and this book has a clever way of explaining how The Doctor leaves the Virgin Universe for the BBC One.   Luckily that ending in the book is in the audio adventure as well.   I have to say it works really well in the audio version also.   One can put this story at the end of season 17 with the ending of The Doctor and Romana adrift in the time vortex and have it tie in perfectly with the opening of The Leisure Hive as it felt like a long time had passed for The Doctor and Romana.

I’m not really a big fan of Gareth Roberts as his stories are either a hit or miss with me. I have enjoyed his novels but the adaptations of his stories for Big Finish have not been all that for me.   The Well Mannered War was actually one I did actually like for the most part.  To be fair any story set during season 17 I will most likely not care for all that much.  Well I should say any audio story as with a book I can change the tone in my mind.  So season 17 is one of my least favorite seasons of Doctor Who and the part of the Tom Baker era that I dislike the most and unfortunately with The Well Mannered War it falls in that category.   But I liked The Well - Mannered War so there is that exception to the rule.

What I liked was the story itself. For the most part it wasn’t bad and once you get past the comedy that is in it you have a pretty decent monster story.  Yes the monster in this story was unique as it uses flies to do its bidding and well the flies ate your insides which were pretty cool in a gruesome way.  I like it when Doctor Who uses monster especially in the audio adventures as you can use your imagination to envision what it is doing and not get disappointed by what they do on television.  Plus monsters are a lot scarier than an alien invasion as they do that all the time.  Gotta love a monster story and this alien monster is a pretty good one.

Wasn’t a big fan of the comedy in this story.  Well maybe just one part of the comedy as I couldn’t stand Menlove Stokes.  Unfortunately he was played by Michael Troughton and well his character is just way to annoying and over the top.  Michael Troughton reprises his role from The Romance of Crime in which he was really annoying in that one also.  This is nothing on the actor but just the way the decided to have him play the part of Menlove Stokes which to me was way over the top and just annoyed me as I was listening to the story.

It was good to see the Chelonians back again as I thought they were a decent Doctor Who alien created for the book range.  It is kind of disappointing that Gareth Roberts hasn’t brought them to TV yet but hopefully one day he does.  It was different seeing them and the humans being polite enemies in the war they are in as both commanders were friends.  The human commander was played really well by Tim McInnery, Black Adder and Planet of the Ood fame, as he used that same type of sacrcasm and politeness that he has done throughout his career.

The Well - Mannered War is a pretty decent Doctor Who story that fits right in the Tom Baker era mainly towards the end of season 17.  It has the usual great performances from Tom Baker and Lalla Ward and John Leeson puts in a great performance as K-9 especially when he decides to run for leader of Barclow.  Another good audio adaption of a Virgin Publishing Doctor Who Book and I can’t wait for more to come out.
Grade B