Doctor Who - The Warehouse Review 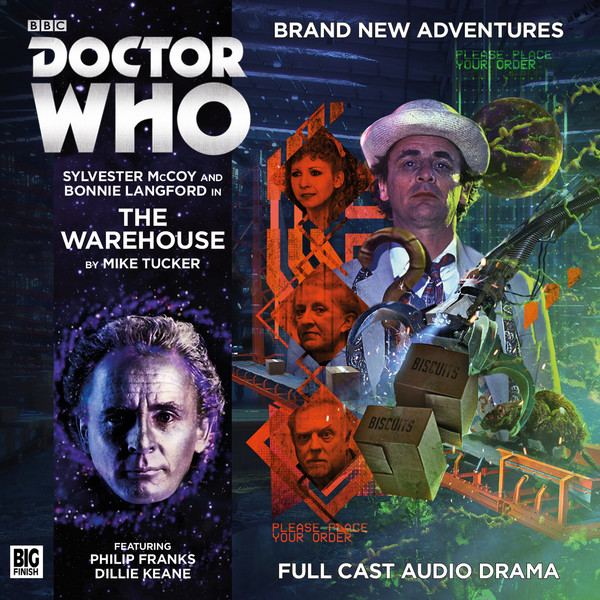 Doctor Who:
The Warehouse
By Mike Tucker
Starring Sylvester McCoy and
Bonnie Langford

The Doctor and Mel have landed in what appears to be a huge warehouse.  What is different about this warehouse is that it is in space and in orbit around a planet.   The Doctor notices that lots of food and supplies are just sitting on the shelves with no hint of being shipped to the planet below.  There also seems to be a strange smell as the travelers encounter a mold that appears to be alive.

Also in this warehouse is a computer that doesn’t appear to be acting correctly and a crew of clones. One set of clones doesn’t seem to be right and insists there is something wrong.   The Doctor is confused and continues to investigate while Mel and the strange set of clones is seeing the supervisor and ends up being forced to fix the computer.  Then there is the problem of the vermin running around the warehouse.  Are they there to invade or something else?  It is up to The Doctor to sort it all out and save the warehouse and the planet below.

I liked The Warehouse.  It had a different feel to it as the story was set mainly in this automated warehouse.  It sort of reminded me of Paradise Towers with the strange computer in charge of the building wreaking havoc around the place and the reveal of what the Supervisor really is.  Leave it to Mike Tucker to give us a pretty good monster which is definitely something you can count on in his stories. That is something I like and one of the reason’s I enjoy his stories so much is that he likes to use monsters.

What I also enjoyed was that we had a departure from the dark and plotting 7th Doctor.  Most of the 7th Doctor stories in Big Finish have that version of The Doctor and it is refreshing to have the season 24 Doctor for a change plus they got rid of him getting quotes wrong.   It was good to see this version of The Doctor have an adventure as they were able to add more depth to him.  It makes me wonder how different that first season would have been if the 7th Doctor was written like this instead of the way he was.  I think things might have been different and we might not have gotten the darker Doctor.  Plus his chemistry with Mel is a lot better also as she is not annoying and screaming the entire time. This was another what if moment that Big Finish has made to fruition with their smart scripts and characterization and it is too bad that this wasn’t what we got for the McCoy era.

The Warehouse was a really entertaining audio adventure with some scary moments and a really good story that keeps your interest through the entire 2 hours.  A story worth getting as it is 2 hours of classic Doctor Who that fits in the era of the 7th Doctor perfectly.
Grade A