Doctor Who - BBC Announces Doctor Who Spin off "Class" 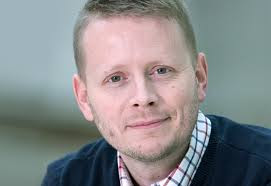 The BIG news that was teased all afternoon and evening, depending on your timezone, has been announced and it is a spin off series called Class and it will take place at Coal Hill School and will air on BBC 3. It will be written by Young adult author Patrick Ness.  The series will be aimed at Young Adults as we will see students take on monsters at Coal Hill School. You can read the full press release below.

Class is a YA series set in contemporary London. Incredible dangers are breaking through the walls of time and space, and with darkness coming, London is unprotected. With all the action, heart and adrenalin of the best YA fiction (Buffy, Hunger Games), this is Coal Hill School and Doctor Who like you've never seen it before.

Steven Moffat says: “No one has documented the dark and exhilarating world of the teenager like
Patrick Ness, and now we're bringing his brilliant storytelling into Doctor Who. This is growing up in modern Britain - but with monsters!”

On his first television series, writer Patrick Ness says: "I'm astounded and thrilled to be entering the Doctor Who universe, which is as vast as time and space itself.  There's so much room there for all kinds of amazing stories, and to work with Steven Moffat and Brian Minchin to find a place to tell one of my own has been an absolute joy. I can't wait for people to meet the heroes of Class, to meet the all-new villains and aliens, to remember that the horrors of the darkest corners of existence are just about on par with having to pass your A-Levels."

Damian Kavanagh, Controller BBC Three, adds: “We’re excited to give Patrick Ness this opportunity to work with us at BBC Three and the Doctor Who family. Patrick understands young audiences and I’m delighted he will use his incredible skills as a storyteller to delight audiences on BBC Three. BBC Three will always innovate and offer opportunities for brilliant new talent."

Polly Hill, Controller of BBC Drama Commissioning, adds: “I am thrilled that Patrick Ness is writing his first drama series for BBC Three. The combination of Patrick and Steven Moffat is an exciting partnership that has created a brilliant Doctor Who spin-off for our BBC Three audience.”

An 8x45 minute series is produced by BBC Cymru Wales in association with BBC Worldwide for BBC Three.

The series will film in and around Wales from spring 2016 and be on air next year.
Posted by DR5WHO at 6:13 PM