Doctor Who - Trailer and Synopsis For Doom Coalition Vol 1 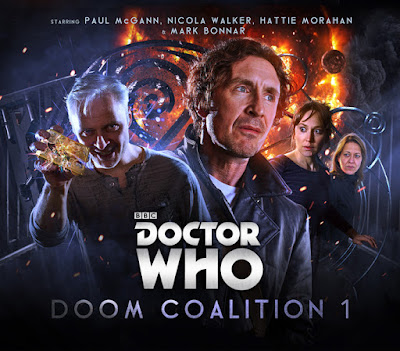 Out now is the new series for the 8th Doctor called Doom Coalition.  This series of box sets sees The Doctor taking on a new threat that might have severe consequences for Gallifrey. You can order the new box set at the Big Finish website.
http://www.bigfinish.com/releases/v/doom-coalition-1-1221

When one of Gallifrey's most notorious criminals attempts to escape from prison, Cardinal Padrac turns for help to the Time Lord who put him there in the first place.

A London Museum holds the key to many secrets from the past. But some secrets are so deadly they should remain locked away. Forever.

With a mysterious plague sweeping through Florence, a rampaging alien behemoth comes between the Doctor and the answers he seeks.

Long buried animosities come boiling to the surface on an ancient and powerful satellite, in a final confrontation that could have unimaginable consequences.