Doctor Who - Sophie Stone Talks Under the Lake 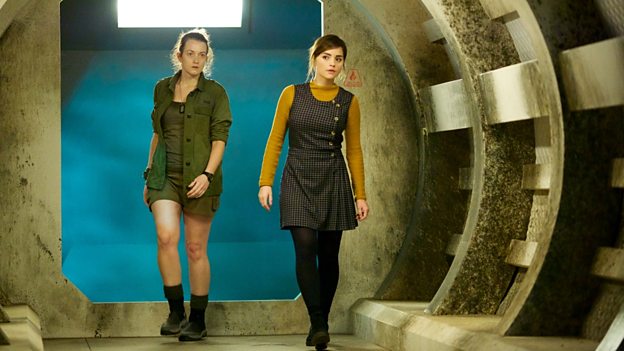 The BBC Media Centre have released two interviews for Under the Lake the first one is with Sophie Stone.

How did you begin your acting career?

Sneakily and with perseverance. I've always found solace and release in the ‘language’ of performance and being told for years that I ‘can't’ made me rebellious and driven. So when a friend dared me to sign up for an acting talent competition which resulted in winning a year’s TV contract, which led to my first paid job on Casualty, I had a thirst to be better. I trained for three years at Rada and was re-born an official actor. This is only the beginning, I'm still learning with every job. That’s the beauty of it.

You play a character who is deaf in a two-part episode based on an underwater base, can you tell us about her?

Cass is fierce, independent, loyal and a serious soldier. She’s a sergeant of a military team hired by an oil company to protect an underwater base. She’s an acute lip reader and her strengths lie in her senses and observational skills. She’s sharp. There’s an apocalyptic feel on the base which keeps her alert and cautious. She is disciplined and holds high regard for her Captain Moran and, like him, would put her life on the line for her team. Her friend and colleague Lunn is her voice, but she owns everything she says. Toby (Whithouse) writes brilliantly strong female roles and there’s no compromise in the way things are run, until there’s no choice. It’s an exciting role to embody.

Your character is strong, a leader, was it an emotionally trying role?

It was physically tough due to the sign language translation, high energy and intense emotional stakes of the scenes, but I loved it. Playing a strong female character who took control of certain situations, but cared deeply about her team, showed the strength of her abilities and celebrated them.

How was your experience of working alongside hearing actors?

The whole Doctor Who team and cast were incredible. We had a riot, but a very supportive riot, where everyone had an awareness of each other and we were accommodated at every stage. Time and energy were given to areas where sign language was used on screen. Supported by a BSL expert Jean St Clair, Zaki and I had intensive homework sessions and everyone in the team were clear, patient and subtle in their approach to access that there was never any reason to feel lost or singled out. Deafness was never shown or felt to be an issue. It makes all the difference when a group works together, and we grew close because of it.

How did you find acting with the Peter and Jenna and the other guest cast?

Both Peter and Jenna were pure brilliance to work with. They have such a demanding job that must be incredibly difficult to balance their personal lives with, but they always find time for those around them and for their devoted Whovians. They are very dedicated and caring people who deserve the adoration they receive. Morven, Arsher, Colin, Steven and Zaki were so exciting to be around, their individual personalities made the room electric. I felt an affinity with Paul since his make up meant he couldn’t hear much so he found conversations quite hard to follow, but this never dampened his spirit. A lot of love went into the show and I hold the designers and technical crew in high regard, they are incredible. Dan and Derek know how to sew a show! They’re ace.
Posted by DR5WHO at 8:25 AM

Email ThisBlogThis!Share to TwitterShare to FacebookShare to Pinterest
Labels: doctor who, Doctor Who Series 9, Sophie Stone, Under the Lake