Doctor Who - Jamie Mathieson on The Girl Who Died 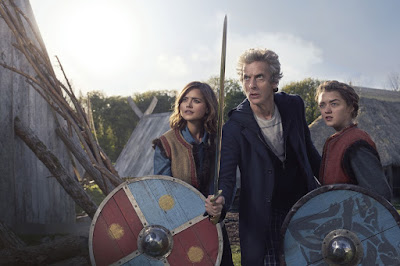 The BBC Media Centre has released an interview with Jamie Mathieson talking about The Girl Who Died.

"The Doctor meets The Vikings! Of course he does. The only question is, why did it take so long?

Odin has come to visit his loyal followers, the Vikings, and reward their bravest warriors with a place in Valhalla. There’s only one problem - The Doctor and Clara, who are having none of this and smell a rat. They are soon caught up in the middle of a war between an advanced race of mercenary aliens and a village full of angry Vikings, who don’t take kindly to having their Gods insulted.

But the Doctor has no TARDIS or sonic screwdriver, just his wits and raw material, in the form of Viking villagers. But these aren’t the roaring warriors of legend, these are the ones who usually stay behind to feed the chickens. The farmers and shepherds who make sure that the roaring Vikings have a village to come home to. But the aliens are coming back and if the Doctor can’t convince the villagers to flee, he just might have to teach them to fight...

There is another big mystery to solve in the form of Maisie Williams, who plays a Viking that the Doctor seems to recognise. But from where? Or is it when?

At one point in development the episode was called The Allfather’s Army referencing both Dad’s Army and Norse mythology. There are also nods to films like The Magnificent Seven and The Dirty Dozen."
Posted by DR5WHO at 8:01 AM

Email ThisBlogThis!Share to TwitterShare to FacebookShare to Pinterest
Labels: doctor who, Jamie Mathieson, The Girl Who Died