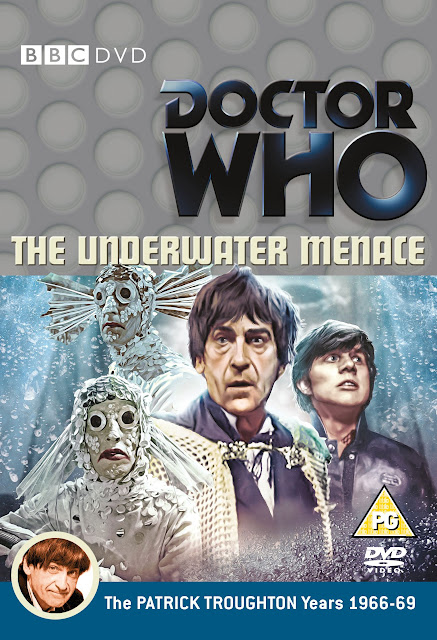 BBCWW have released the details for The Underwater Menace which is to be the last classic Doctor Who story on DVD to be released.  It also looks like the missing episode one and four will be telesnaps as the animation was cancelled last year.  Fans will be able to see the recovered episode two which was returned back in 2011.  Finally this DVD and the extras will finally be seen and hopefully someday we will get the missing parts found.

Starring Patrick Troughton as Doctor Who, with Michael Craze as Ben Jackson, Anneke Wills as Polly, and Frazer Hines as Jamie McCrimmon
Written by Geoffrey Orme
Directed by Julia Smith

The TARDIS lands in the lost city of Atlantis, where the crazed Professor Zaroff has convinced the Atlanteans that he can raise their city from beneath the sea. But the Doctor discovers the terrible truth behind Zaroff’s plan – he intends to destroy the entire planet. With the doomsday clock ticking, the Doctor and his companions must battle to prevent the apocalypse...

The Underwater Menace is the fifth serial of the fourth season, which was first broadcast in four weekly parts from 14 January 1967 to 4 February 1967. The story introduces Jamie McCrimmon's (Frazer Hines) on his first journey with the Doctor as a travelling companion. This special release will contain the two re-mastered existing episodes, with the two missing episodes represented with restored audio and surviving stills, as well as over an hour of extras.