Doctor Who - Return to Telos Review 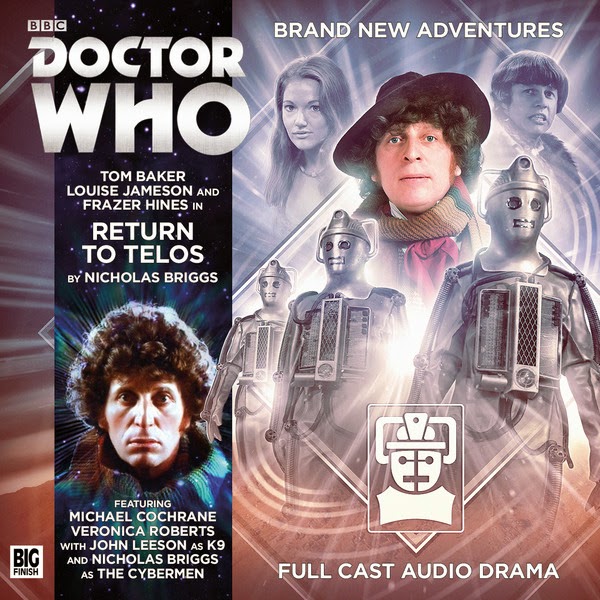 The Doctor and Leela have landed on Telos but not where and at the time that the Cybermen had hoped.  In fact The Doctor had diverted the TARDIS to a time that he was there before when the tombs were discovered and opened up.  There the Second Doctor and Jamie are trying to stop the return of the Cybermen while the Fourth Doctor decides to go back and try and save Krelos.  The Doctor discovers how the Cybermen infected his TARDIS by seeing Jamie again and it has given him the idea to save Krelos as long as he isn’t too late in returning to Krelos.

Return to Telos is the second part that started in The Fate of Krelos.  I didn’t care for that audio all that much and was hoping that the second part Return to Telos would be better.  It was better but I did not care for it all that much.  To me it felt like a wasted opportunity.  Here you had the Second Doctor and Fourth Doctor and they did not meet.  Ok. I can somewhat understand that but at least have him meet Jamie again.  Jamie will forget it because of the events in The War Games but at least give The Doctor that moment again.

Frazer Hines was in top form as Jamie and playing The Doctor.  It is amazing how close Frazer Hines sounds like Patrick Troughton.   If you never heard a Second Doctor audio adventure before and heard Frazer Hines as the Second Doctor you must rectify that problem.  Whether it is with Return to Telos or one of the Companion or Early Adventures stories you should give his impersonation a listen.  It is so worth it as sometimes I think it really is Patrick Troughton at times.

The story on the other hand was pretty weak.  It just did not have the feel of a Fourth Doctor story and he felt really defeated and thought about giving up which wasn’t like this incarnation of The Doctor at all. I didn’t like the way they characterized Leela in this story as she just didn’t seem like Leela that we all know.  She just seemed more negative and feed up.  Perhaps this story leads into Invasion of Time and this adds to her leaving but who knows she just didn’t seem like her normal self.  Plus they used the reset switch which really doesn’t work for me as it feels like a cheap way out of coming up with a solution.  This disappoints me as Nick Briggs has written some really good Big Finish stories and it was disappointing that this one did not live up to the expectations I had going in with both parts.

Return to Telos ends the fourth series of Tom Baker adventures and sadly it ends a really good series on a bad note.  The series was really good and enjoyable with a diverse of stories.  Series 4 was entertaining and Return to Telos did have some entertain parts to it and wasn’t a total failure.  It just didn’t work for me at all and that is a shame because going in it looked to be something great.
Grade C